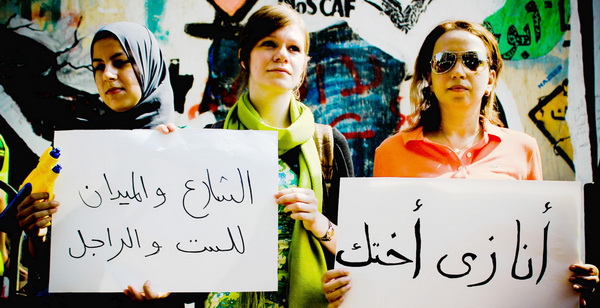 On a scorching Saturday afternoon in Talat Harb Square, a woman in a flowing fuchsia dress quietly asked if she could have one of the squirt guns filled with pepper spray.

After brutal attacks last month on women protesting sexual harassment, the organisers of a march on Saturday were taking no chances.

In addition to a dozen small, pepper spray outfitted pistols, the group also had men in neon yellow pennies
recruited to act as security for the women.

Saturday’s march from Mohammed Mahmoud Street to Tahrir Square was organised to protest the sexual harassment that has, for many, marred the hope inspired by last year’s revolution.

There were only about ten women standing in the sun at Mohammed Mahmoud Street, but they were quickly joined by dozens of men from the surrounding streets.

As the security team formed a barrier around the women, an exchange of shouting took place between the women and crowd of men who had gathered.

Most of the shouting however consisted of a discussion rather than a fight. Men were saying they supported what the women were standing for.
One man drove up on a motorcycle, smoking a cigarette, and screamed, “God bless what you are doing, and may He protect you.”

“It needs to start with educating young kids,” one man commented. Rana Al-Hariry, one of the protesters, agrees with him. She said recently on a microbus, a six-year old-boy grabbed her breast.

If a small boy is motivated to do this, she said, then the problem has deeper roots than just being a consequence of men feeling sexually repressed in an increasingly Islamic Egypt. Sexual abuse has become a mainstay in the society, so change must come from within, she said.

Every chance she gets, she calls over groups of young boys to discuss sexual harassment.

She runs her hand over a boys shoulder and asks, “Do you like that?” “No,” he responds.

“Then why would you think I would like it?” The question left the boy stumped.

While the protesters were small in numbers, almost outnumbered by reporters, and easily outnumbered by their security detail, they were taking their debate into the public sphere.

If Al-Hariry and her cohort do want to effect societal change, then their debates have to move off Twitter and into the street were the abuse is taking place.

However, following horrific occurrences this summer of women being stripped naked and violated by mobs of men in Tahrir Square, public discourse comes with frightening stakes.

One way the women were getting their message out is by passing out small flyers with their slogans.

Some men crumpled up the paper and threw it in the gutter, but other men, in galabiyas and Levis, stood and pondered.