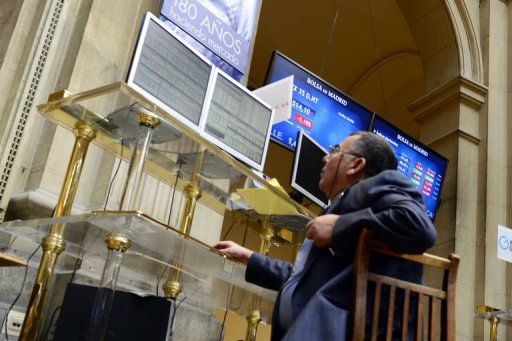 A June 28-29 EU summit was hailed as a breakthrough, promising fresh capital for Spain’s struggling banks, a European bank union to keep the lenders in line and making it easier for the bloc’s new bailout fund to help states in trouble.

The financial markets soared in response, with borrowing costs for Spain, Italy and other weaker eurozone members all falling sharply in relief that the 17-nation eurozone was finally getting to grips with the near three-year crisis.

This week, however, investors have turned increasingly dubious as critics note that the Spanish banks will have to wait some time for any aid until the European banking regulator is in place to oversee their restructuring.

As a result, Spanish long-term borrowing costs have jumped back to dangerously high levels at around 7.0 percent — rates which forced Greece, Ireland, Portugal into seeking massive EU-IMF bailouts.

“What will really determine their success is that they turn into concrete realities, in a supple, quick and effective way,” Rajoy said, adding: “Europe must fulfill the accords as swiftly as possible.”

Complicating matters further, Greece wants more time to implement its latest bailout, saying that while it accepts the tough terms, it needs some slack so as to ease the pressure on an economy stuck deep in recession for a fifth year.

Cyprus, which now holds the EU rotating presidency, has just asked the EU — and close partner Russia — for help too, saying that the problems in Greece which have pulled it down and so the burden needs to be shared around.

Against this backdrop, eurozone finance ministers have to be seen to be pushing the agenda forward, especially on the most immediate problem of the Spanish banks, which need up to 100 billion euros, European sources told AFP.

Germany, along with fellow hardliners Finland and the Netherlands, want strict conditions on wider economic policy tied to any funding for Spain’s banks, the talks, the sources said.

On Friday, a senior European official said Spain’s banks could not get any cash from the ESM until at least early next year because setting up the European bank regulatory system would “not occur before the first half of 2013.”

The two have to go together, as agreed at last month’s summit.

“The first Spanish banks will need to be recapitalised by the end of this year and many others in the spring of next year,” the EU official said, adding that he hoped the deal could be nailed down this month.

“We ask for the adjustment (targets) to be reached not in two years but later,” Samaras told parliament.

In exchange for extending the 2014 deadline to meet strict deficit benchmarks, Samaras promised that his newly elected government would meet all other commitments the country’s creditors have demanded.

“Our problem is not adopting reforms, which we will do without question. It is not reaching an objective, which we will meet but it is finding an end to the recession,” he said.

Greece’s recovery programme was “off-track,” he conceded, but added: “We will do everything to change what needs to be changed, fight against recession so that the country meets its targets … while reinforcing our country in the heart of the euro and the European Union.”

In Brussels, an EU official said Greece would not get its next aid tranche “until the Eurogroup (of finance ministers) has determined that the programme is back on track,” with no decision likely until August.

Monday’s meeting will be “a first exchange of views on what the intentions of the Greek government are,” the official added.

As the positive gloss on the June 28-29 summit wears thin, International Monetary Fund chief Christine Lagarde warned Friday that the global economy was slowing because Europe was not doing enough to fix the debt crisis.

Lagarde said much much depended on “the right set of actions being taken in Europe in order to avoid very significant deterioration and to eliminate major threats.”

The June 28-29 summit was progress, she said, but “from the IMF perspective, … more needs to be done in order to really complete the architectural job of the eurozone — a monetary union, a banking union followed by a fiscal union.