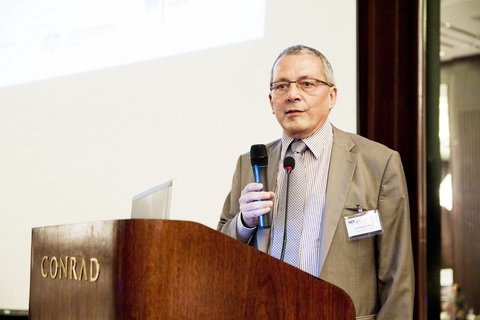 Although Germany has been embroiled in the Euro crisis for the past year and half, the Middle East has continued to be one of its top foreign policy priorities. The connection with the former regime might not be as obvious as that of the UK or the US, but Germany did host Hosni Mubarak in 2010 and in early February the German press speculated about a possible safe exit for him to Germany. Chancellor Angela Merkel was closely following the events of the Egyptian Uprising, approaching the topic of regime change cautiously. Her appointee to Cairo H.E. Michael Bock witnessed the Egyptian Revolution from its build-up to the downfall of Hosni Mubarak and the current struggles for political reform.

The Daily News Egypt had a chance to sit down with him at the National Employment Pact Summit, organised by the German organisation Deutsche GesellschaftfürInternationaleZusammenarbeit (GIZ) to promote blue-collar employment in Egypt.

Did you have a chance to meet the new Egyptian President Mohamed Morsy?

I met him before he became president. It was in March-April this year when our foreign minister was here and I took part in that meeting in Cairo University last Saturday.

What were your impressions?
My impressions were that he is determined to cope with his cumbersome task.

But that is quite a historical change in Egypt. What do you think will continue from the previous regime and what will change?

Egypt has a strong tradition in bridging gaps and finding compromise. Look at the neighbouring countries where there is so much killing and conflict. Here in Egypt people know how to handle complicated situations. That’s why I am very optimistic.

In the GIZ film we saw about their employment initiative, you talked about German solidarity with the protesters last year before the fall of Mubarak’s regime. What took so long for the German diplomacy and government to voice support for the protests?

I don’t think it took long. Compared to other states, we showed our solidarity very early. We took injured protesters to Germany. Don’t forget my government has said time and again that democracy is what counts and if this brings political Islam to power, it is not upon us to criticise. We are going to cooperate with them. It’s in the sovereignty of Egypt and the Egyptian population to decide its own future. It is difficult for sure. These politicians don’t have experience; many of them were imprisoned for a couple of years, but they tried to build up the new society. They have a programmatic concept and now they have to start. It won’t be easy because there is a lot of internal resistance and there is also a very complicated economic situation. All these long term goals need a lot of time to be accomplished, starting with education. You have to invest in education today to get positive financial results tomorrow. This is an exercise that takes you a decade at least.

How has the Arab Spring changed German foreign policy towards Egypt and the Middle East?

We have many aspects as far as our development cooperation is concerned. We continue being active in the field of water, energy, renewable energy and the environment. Our activities were always focused on helping the population. We should do more but it’s obvious we cannot solve problems just by increasing help from outside. It is the Egyptians themselves who have to get on their feet. I think they will manage to, because the most important part of this revolution was that people gained self-confidence. They are no longer standing and waiting until the boss tells them what to do. If you want to take an issue into your own hands, you will manage to.

The EU has dealt with Mubarak’s regime for the past 30 years and there had been billions of euros flowing into the country, whether through grants, loans or investment, but that money has not really influenced the base level of society. Has the Arab Spring changed the way in which the EU, and Germany specifically, will approach economic relations with Egypt?

Economy is a shy field. Economy mainly is psychology built on facts. We want to get more active, that’s for sure, but the first step has to be done by the Egyptians themselves. It is difficult for me to invite German entrepreneurs to come to Egypt and to invest when at the same time I am observing that Egyptian entrepreneurs are taking their money into a suitcase, leaving their country and going abroad. There are big projects on the way in the oil and gas sector. The German economy is not afraid of what is going on here and therefore the prospects are quite positive. Let me give you an example: the stock exchange market – booming.

How will democracy promotion continue in Egypt given that there was a raid on a number of foreign NGOs, including a German one, late last year?

We cannot tell Egypt what to do and we do not want to. We can make offers and we do so. If these offers are accepted – fine. If they are not accepted, then we must say, Egypt is a sovereign country and we refrain from certain activities. The president has been in charge for less than a hundred hours. We must give Egypt time to define itself. We know that Egypt needs this time because we had our experience with the German reunification and there is still some homework to be done after 20 years. So we cannot say, come on boys, the revolution was last year, why haven’t you accomplished it yet? No, we must all be patient, including the demonstrators in Egypt themselves because so far they only could say what they rejected and they were successful. Now the much more weighty task starts to define what they want.

In terms of regional politics, there is obviously going to be a change in terms of the Israeli-Palestinian conflict. What role do you see Egypt playing in terms of pushing the issue for Palestinian statehood?

Egypt has always said that it is fighting for the realisation of the legitimate rights of the Palestinians and so does Morsy now. At the same time all the leaders have repeatedly said that the international contracts will remain valid. So it is a hard task to bring movement into the Palestinian file. We are regarded as strong allies and friends of Israel, but at the same time the German government has never stopped criticising Israel for its policy in the occupied territories.

So are you supporting Palestinian statehood?