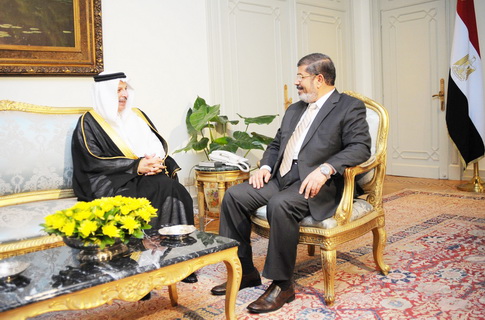 President Morsy will make Saudi Arabia his first destination abroad as president. The announcement of the trip comes as relations between the two countries have been racked with tension over the results of the recent elections and conditions faced by Egyptians in the kingdom.

Egyptians living in Saudi Arabia form the largest Egyptian expat population. Most expats do not feel comfortable with the working conditions they face. “Saudi Arabia treats Egyptian expats worse than any other country in the whole world, not just the Arab world,” said Gamal Eid director of the Arabic Network for Human Rights. (ANHRI)

He said ANHRI is preparing to address Morsy on Sunday with issues regarding Egyptians living in the Gulf, including concerns voiced by the family of the Egyptian lawyer currently detained in Saudi on charges of drug smuggling.

Egyptian-Saudi relations have been strained recently following the arrest of Egyptian lawyer Ahmed Al-Gizawy last April in King Abdul Aziz Airport in Jeddah for reportedly trying to smuggle drugs into the country.

Gizawy had previously filed a lawsuit demanding better rights for Egyptians working in Saudi Arabia. His arrest sparked protests in Egypt and the situation became so tense that the Saudi ambassador to Egypt was recalled. The ambassador later returned in May when Egyptian officials feared losing Saudi aid as a result of the tension, according to The New York Times. Since then, a large contingent of military and state security troops have been posted in front of the Saudi embassy in Giza.

The Saudi Ambassador to Egypt, Ahmed bin Abdulaziz Qattan paid a visit to Morsy at his presidential palace last week, and extended an invitation from King Abdullah II of Saudi Arabia to visit the Kingdom, according to state- run Al-Ahram newspaper. The purpose of the meeting, as reported by Al-Ahram, was to strengthen bilateral relations between the neighbouring countries. Morsy accepted the invitation and will be travelling to the kingdom next Wednesday.

Qattan reportedly brought up two thorny issues in Egyptian-Saudi relations during his visit with the president, Egyptian expats in the Gulf country and the Saudi aid to Egypt.

With regards to Saudi aid to Egypt, Qattan said it had increased after the uprising rather than decreased. This may be a reference to allegations that the country had decreased funds to Egypt out of displeasure. Egypt’s economy has been struggling after the revolution, amid fears of instability in the country.