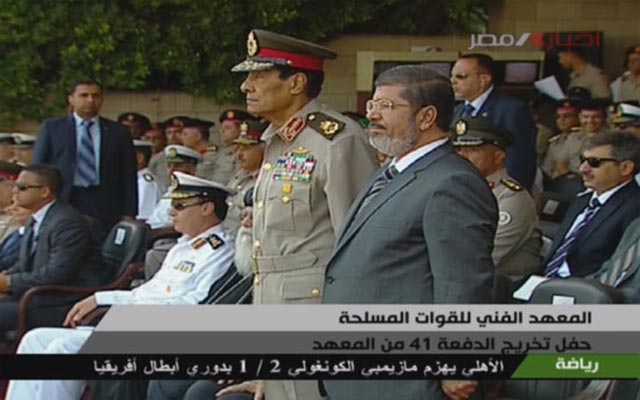 A day after challenging the country’s ruling generals decision to dissolve the lower house of parliament, President Mohamed Morsy shared a dais with the two heads of the Supreme Council of Armed Forces at the  graduation ceremony for the Military Technical College.

Throughout most of the ceremony, Morsy sat calmly between Field Marshal Mohamed Hussein Tantawi to his right and Lieutenant General Sami Anan to his left. The ceremony was the first public event the three attended after the president’s decision to erase the top generals’ decision to dissolve the parliament following a ruling by the Supreme Constitutional Court.

The graduation, a perfunctory event that symbolizes the importance of the military to the Egyptian state, of the 49th class of the Military Technical College and the 41st class of the Technical Institute of the Armed Forces was a rather mundane occasion.

Observers of the Egyptian political scene were keen to see if Morsy, Tantawi and Anan would display any public disdain while in each other’s company.

Some newspapers reported, unlike previous ceremonies the three have attended together, each showed up in separate cars. While the move can be interrupted as simply an operational management issue, the president attends meetings separately from the ruling generals all the time, most commentators attributed added weight to the move because of the contentious political atmosphere following Morsy’s move.

At previous ceremonies for the military, Morsy’s Facebook page has posted updates applauding the ‘Supreme Commander of the Armed Forces President Mohamed Morsy,’ for his ceremonial performances. The Facebook page posts under Morsy’s name seems to indicate that the president believes he has the full presidential authority to oversee the military the SCAF had stripped him of before his election.

The Military Technical College teaches engineering and the army’s engineers graduate from there. There are several branches of engineering to study in the college. Graduates of the Technical Institute become technical lieutenants.   There was a brief history on the college and institute during the ceremony.