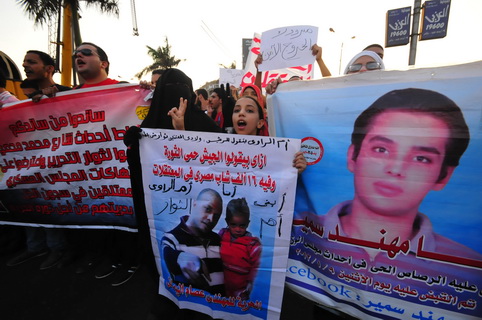 They called on President Mohamed Morsy, a former inmate who has witnessed the conditions and subhuman treatment of the Egyptian prison system, to free their loved ones. They voted for Morsy and now they wanted him to act.

Two fathers relayed the tales of their sons’ arrests during a press conference by the No to Military Trials for Civilians movement at the Journalist’s Syndicate building on Sunday night.

Amid the backdrop of emotional testimonials by former prisoners and family members of those facing military trials, the No Military Trials for Civilians movement outlined six demands for the newly elected president who had previously promised to free their family members. They called on the president to free all of those facing “unjust” trials at the hands of the Supreme Council of Armed Forces, and allow them to be tried in civilian courts.

The No to Military Trials movement demanded the president compensate the families of those with sons and daughters inside the military prison system. They also called on Morsy to refuse any attempts to grant the ruling military council amnesty and to hold SCAF accountable for their actions.

Two fathers pleaded with the president, a man who had once shared their sons’ fate, locked in a prison unfairly and sentenced for a ‘political crime’ despite the state’s refusal to label it so, to let their sons go.

Mohamed Eihab, 16, was sentenced by a military court to 15 years in prison for breaking curfew. Eihab was subjected to torture and transferred to another prison after his father threatened a lawsuit against those who tortured him.

Ahmed Dakoury shared a similar tale, one that brought his father to tears. Dakoury’s case also demonstrated how the judicial process sought to hide the names and numbers of those trapped in the system. The military has given differing accounts of how many civilians actually face trials within its system. Observers, including those at the movement, place the number at least 12,000 but this has not been verified by the military.

Dakoury was snatched from a Port Said voting station, during the first round of elections, by an officer as he finished voting with his father. As Dakoury’s father pleaded with the officer and asked him explain why his son was being taken into custody, the officer shot back “do you want to go with him?” “Yes” his father replied.