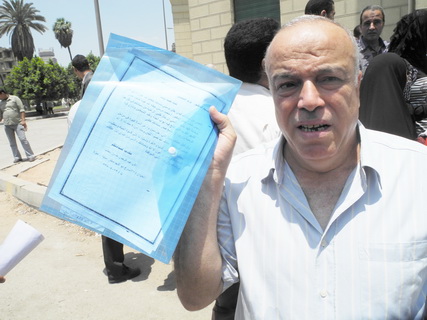 Established just this past Saturday, the Abdeen Palace complaints office has quickly turned into a hotbed of emotion, where citizens share their collective problems, anxieties, and euphoria in a mix of feelings and bureaucracy.

Hundreds braved the sweltering midday heat on Sunday to stand in queues clutching envelopes and plastic folders filled with their complaints, their hopes and their problems. Though there was a strong undercurrent of hope, the bureaucracy involved seems haphazard at best.

The process, it seemed, involved handing over a typed or written complaint, there is no official form, in order to receive a number on a slip of paper in exchange, through which the citizen will be contacted directly. How officials will get through the enormous amount of handwritten complaints within the promised 10 days remains to be a mystery.

“I have been with the Petrotrade Company for ten years. They take 40 pounds from me every month for medical insurance and promise that when something happens, they will pay 75 percent of the bills,” lamented Amr Elwan Ahmed, 55. “My two daughters have birth defects and I have paid EGP 80,000 in hospital bills. The company has only paid EGP 7,000. Is this democracy? Is this fairness? I don’t care about Morsy or Mubarak or even the blue jinn, I just want my rights.”

Ahmed was not alone in his indignation, as a crowd of around 800 people gathered outside the gates, shouting at no-one in particular for more efficient service and less time in the sun. Many more, however, saw the opening of the office as cause for celebration. Families handed in their complaints and set up picnics on nearby gardens.

“This is a military area! If you don’t like the system, you can leave,” yelled a police officer angrily at an equally vehement old woman. He was surrounded by hordes of people as he guarded the slips of paper that link the public to their president. He shouted out names and one by one, people raised their hands and receive their receipt of complaint.

“I’m very happy because someone is finally listening to me. I never thought even in my dreams, because I’m just a mowazaf (low-level employee), that the president himself would let me come to the gates of this palace. It did not even enter into my thoughts,” said Ihab Moawad in passing as he rushed by to stand in the queue, bright blue folder in hand.

Regardless of whether the complaints process will actually bring about results or not, the opening of the office shows a marked contrast with the Mubarak-era intolerance with any expressions of discontent. It is also a step toward Morsy honouring the promises he gave in Tahrir Sqaure on 19 June, to always have his doors open and be connected to the people.

“Of course, with this huge number of people it is tough and hot and people will go a little crazy. But it’s a start! The knife is in the cake, my friend (a popular Egyptian idiom meaning things are underway). The president is listening. Did the last one ever listen?”