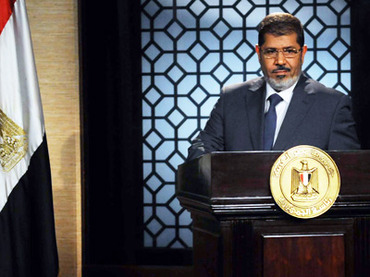 President Mohamed Morsy’s decision on Sunday to reinstate Egypt’s People Assembly elicited mixed reviews from Egyptian politicians and political observers, most of whom believe the president asserted his political power to directly challenge the ruling Supreme Council of Armed Forces.

Ahmed Maher, a political activist and co-founder of the April 6 movement, was elated after learning about the decision from a Daily News Egypt reporter who broke the news to him. “This is a good thing,” Maher said. “It’s wonderful because Morsy took the legislative authority away from the Supreme Council of Armed Forces (SCAF).”Tarek Al-Malt, member of the political bureau of the Al-Wasat Party, said the president’s move was a good sign, but was worried about the political fallout that might occur in response to the legality of the decision. “The decision is very good regardless of what we will be hearing in the next few days about the legality or constitutionality of the decision.” Al-Malt said the president’s decision is a solid middle ground move that should alleviate Egypt’s “legislative crisis.”

Adel Al-Qola, Head of the Egyptian Arab Socialist Party and Member of Parliament was similarly pleased. He said the decision was “100 percent correct and right on legal, constitutional and political levels.” Al-Qola said since Morsy is president, he has the authority to reinstate the dissolved legislative body. “Before, SCAF was acting as president. But now, we actually have a president so, he has every right to make this decision,” he added. Al-Qola further noted that the High Constitutional Court itself was created by a president’s order and that it does not have the right to object to another president’s decision. He said the court had victimised the parliament and stripped the body of its legislative authority, garnered through legitimate elections.

Hesham Akram, a member of the Justice Party, was not pleased with the decision. Akram said the decision seemed suspicious and described the president’s actions as “strange timing.” “This is a disastrous situation that we are in now,” Akram said. “How can the president overstep the judicial authority when he’s taken an oath to respect the law?” Akram said he wished the news was false. He fears that the decision will bring us into a confrontation with the SCAF. “The decision will certainly be appealed in the next few days,” he said.

Essam Shiha, member of the Wafd higher committee, was upset with President Morsy’s decision which he thinks will lead to a confrontation between the ruling institutions over legal boundaries. “This sends a passive message to the Egyptian people,” Shiha said. “Their president seems be assuming his powers by overruling judicial rulings.”