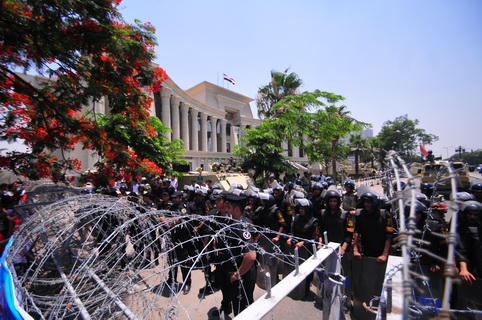 While a legal battle between the executive and judiciary branches builds after the decision by President Mohamed Morsy to reinstate the Supreme Constitutional Court’s ruling to dissolve parliament, many observers have rightfully pondered just what legal authority Morsy actually has.

With the Supreme Council of Armed Forces (SCAF) standing between Morsy and his full executive powers, and a judiciary that has called into question the parliamentary election process, most constitutional experts are struggling to find legal precedents to support any of the decisions taken by the military, judiciary, and executive branches.

The result has been a rash of opinions from well-respected constitutional lawyers and professors that take positions based on politics rather than sound law. Judge Tarek El-Bishry, head of the committee created by SCAF, only days after the end of the 2011 uprising, to draft amendements to the constitution, thinks the president has no legal foundation to reinstate the parliament.

“The president withdrew SCAF’s decision which SCAF took when it was filling in for president but now Morsy is President,” El-Bishry said. His main issue with the president’s decree lies with the SCC’s decision. El-Bishry said the president may have the right to reinstate parliament, but not the one-third of the members elected as independents but tied to parties. “The People’s Assembly is reinstated but one third of the members should have been re-elected,” he said.

Mohammed Abdel-Ghafar, board member of Egypt’s Lawyers’ Syndicate, said Morsy’s decision indicates that he does not know what the boundaries of his powers are as president, which were outlined by SCAF in its supplementary constitutional declaration. “This actually means that he does not recognize the supplementary constitutional declaration,” Abdel-Gafar said.

Abdel-Ghafar, like other experts believes that the decision to reinstate parliament was not solely the president’s. Abdel-Ghafar believes president surrounded himself with people from the Muslim Brotherhood who give him wrong advice. He also thinks that the decision was reached during the Brotherhood’s Shura Council meeting a day before the president’s decree. “Manipulating the High Constitutional Court’s decision is the seed that the Muslim Brotherhood will use to start ruling Egypt,” he explained. He said Morsy has violated his oath of office and fears Egypt is entering a new phase of what he described as “legal thuggery.”

While Tharwat Badawy, law professor at Cairo University, said the SCC decision was “horrible and it shows that the court is not very clear about its authority. This is a disaster….the judges are losing their regard,” Abdel-Ghafar praised the court’s decision, illustrating the very real divide between legal experts. “Of course the court’s statement is correct,” Abdel Ghaffar said. “The court’s decision is binding to everyone from the head of the state to the most average person.”

“These are not members of parliament since the People’s Assembly lost its legislative authority, they are just ordinary people and ordinary people have the right to meet”, he said. Fouda thinks that, even though many lawsuits against Morsy will be filed, if a court rules against him, it will not be upheld just like the SCC’s ruling.

“We are in a lawless state,” Fouda said.