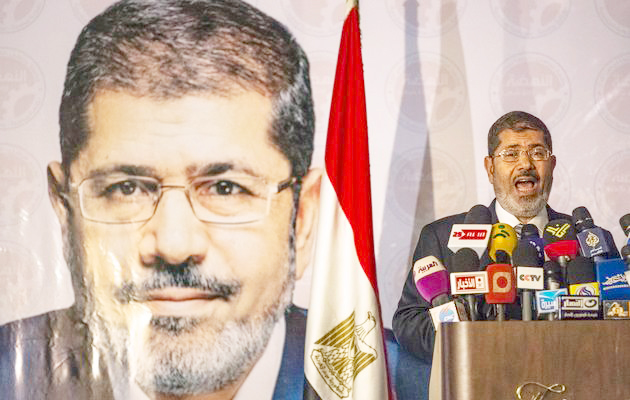 President Mohamed Morsy’s decision to reinstate the dissolved People’s Assembly prompted a swift response from lawyers on Monday who filed a flurry of lawsuits challenging his decision, potentially leading to prison time for the president.

The Supreme Constitutional Court’s general assembly said they were reviewing several lawsuits filed against the president’s decision and would begin hearing the cases on Tuesday.

One group of lawyers filed a lawsuit with the public prosecutor’s office, suggesting Morsy circumvented the judiciary with the move and should face jail, disenfranchisement or suspension.

Mohamed Abdel Aziz, lawyer for the Al Nadeem Centre for the Rehabilitation of Torture Victims, supplied the Daily News Egypt with a copy of the lawsuit. The suit accuses Morsy of ‘trickery’ for reinstalling the SCC-dissolved parliament.

The lawyers said the president defied article 24 of the constitutional proclamation – issued by the Supreme Council of Armed Forces (SCAF) in March 2011. “Egypt is a state supposed to be a state of law.” Ragia Omran, one of the lawyers who co-signed the lawsuit, said. “Morsy’s decision poses as a threat to the judiciary authority in the country.”

Omran also added that SCAF’s decision to dissolve parliament – following the Supreme Constitutional Court’s ruling – was “not an administrative decision but a sovereign decision.”

Mohamed Aboul Ghar, head of the Egyptian Socialist Democratic Party, said Morsy had lost credibility with the decision to reinstate parliament, and similarly usurped the powers of the judiciary. “Mosry said he would lead a democratic, civilian, modern government,” Aboul Ghar said. “Unfortunately, less than two weeks after he took office, he made a decision that cancelled any hopes of a democratic, civilian, modern government.”

According to the suit, Morsy’s decision similarly violated article 323 of the Penal Code, which states that anyone stalling or ceasing the implementation of a court ruling should be imprisoned and suspended/disenfranchised. If the misdemeanour court agrees to proceed with the case after investigations, President Morsy could face three years of imprisonment.

“If Morsy wanted to make a real decision he should have revoked the SCAF supplementary decree,” Aboul Ghar said.