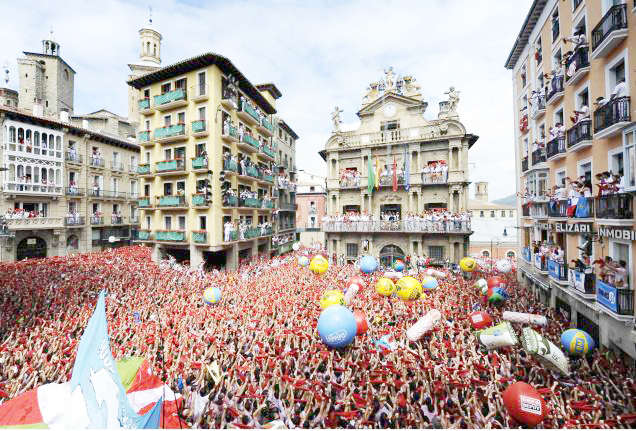 Pamplona (AFP) — Spain’s most  famous fiesta, the San Fermin bull running festival in Pamplona, is taking a hit from the economic crisis as revellers cut corners to save money.

The cobbled streets of the northern city are still packed with party-goers from around the world, drawn by the carnival atmosphere and the chance to be chased by half-tonne bulls every morning.

But hotels report lower occupancy rates, and sales in restaurants and bars are down.

Instead, many people choose to eat homemade food and drink sangria and beer bought in supermarkets in the streets during the nine-day festival that began on Friday.

Luis Armendariz, manager of the Cafe Iruna, a Parisian-style spot once frequented by Ernest Hemingway that overlooks the central Plaza de Castillo, said he expects sales during the festival to be down by 15-20 percent over 2011.

This San Fermin festival looks set to be the worst for business since Spain’s economic crisis erupted in 2008 with the collapse of a property bubble that has sent the unemployment rate soaring above 24 percent, the 48- year-old added.

“We have really felt an impact. There are fewer people but what really affects us is the street drinking,” he said as he stood behind the counter of the cafe, jammed with dancing revellers wearing traditional white and red garb.

The historic centre of Pamplona, the capital of the region of Navarra, was full of people carrying plastic bags full of bottles of beer and sangria, which they swilled from plastic cups as they stood in groups.

Many people held picnics of sandwiches and other snacks while sitting on the ground in squares across the city.

Israel Jimenez, 26, and Rafael Gonzalez, 23, two soldiers from the southwestern city of Seville, said they were eating store bought food because prices at bars and restaurants shoot up in Pamplona during the festival.

But they said they were still willing to open their wallets to have a good time.

“We will think about the crisis tomorrow. But you have to live the day and be happy here because that is why we came here,” said Jimenez as he sat on bench alongside his friend in front of the Cafe Iruna.

Pamplona city hall predicts about half a million people will flock to the city of 200,000 residents over the nine days of the festival, roughly the same as turned out in other years.Hoteliers are less optimistic.

The Navarra Hospitality Association predicts hotel occupancy in Pamplona during the fiesta, which dates back to medieval times, will be down by around 10 percent over last year.

Fewer people stay overnight and those who do come are saving cash by staying for fewer days, with most checking in for just two nights, said the association’s secretary general, Nacho Calvo.

“There is a lack of promotion of the festival on the part of the government. The festival is very famous but you have to maintain the brand. And that is not being done,” he said.

With Spain under pressure to rein in its public deficit, the budget for the San Fermin festival this year was slashed by 8.0 percent over 2011 to 2.4 million euros ($3.0 million), its fourth straight annual decline.

Pamplona officials are banking on the festival — made famous worldwide by Hemingway’s 1926 novel “The Sun Also Rises — bringing in more than 70 million euros in tourism earnings this year.

Bars are allowed to remain open until 6:00 am during the fiesta and the event accounts for up to a third of total annual sales at some establishments in the centre of the city.