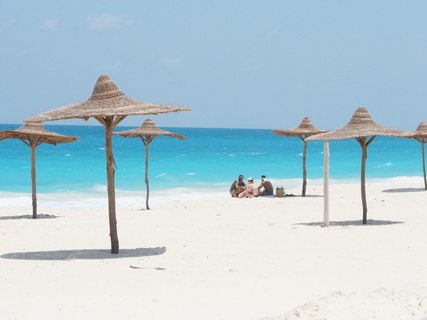 Welcome one and all to the inaugural year of the annual Sahel Awards, where we recognise the concerted efforts of those who have worked tirelessly and ceaselessly to ensure that each summer is as Sahel-esque as the last.

The Sahel Vibe, as I like to call it, is an enigma to many and about as easy to nail down as jelly, but is familiar to most [read: select] Egyptians as the impending sense of dread at Ramadan’s slow advance.

Our first category is by far our most competitive. The Best Sahel Clothing category has long been recognised as emblematic of the entirety of the Egyptian population, with those able to catch the glazed eyes of club goers ensuring a good 15 minutes of fame, as well as continued success in life, I’m sure.

But who will clinch the victory in this bloodthirsty competition? Will it be the ubiquitous, and always-safe, deep white Vee? Or maybe the lively pink short-shorts that I’m constantly assured are nothing like the ones I see sported by the proud New York Gay Pride Parade participants. Perhaps even the colour-coordinated New Era caps sporting such deep philosophical mottos such as “SWAG” might cause an upset.

And our winner, to the surprise of absolutely no-one, is that sinking feeling of despair when one realises that one’s wardrobe cost as much as our parliamentary elections and exactly two hours into mid-July, will be about as useful.

Our second category is an essential one for any Sahel-goer worth their knockoff Ray-Bans. We’re sure the Awards must have you on the edge of your gilded bar stools by now so we’ll keep it short. The winner of our Best Sahel Location beat out all other competitors – including new additions, Caprice and El Villa – decisively in crowdedness, overall Kardashianism, and steroid-aided muscle mass per square metre – no mean feat when you consider, well, it’s Sahel.

To even be considered for the position, entries must have used the word ‘hot’ no less than 14 times in various advertising media. This award goes to the beach at Diplo! The human compactor of Tahrir proportions was awarded extra points for littering the shallow beach with rocks, presumably to ward off the dreaded Islamists who are known to be notoriously poor at circumventing obstacles. Kudos to the inhabitants for effectively marshalling their defences to repel the greatest threat to day-drinking and obnoxiously loud music since basic human decency.

Our final award is won by the same competitor year after year, no matter how much trends change and no, it is still not okay to wear Crocs. This award is simple. It is the “Hate How Much I Love You” Award and, far from talking about abusive boyfriends, it is an award given to a place that, in theory, should be an absolute hell for anyone who fancies independence even just a little bit. It is a place of droning monotony, of endlessly repetitive and unimaginative ideas and of the basest superficiality outside of Manhattan.

Yet theory fails and year after year this place captures our hearts all over again. Results are still pending over whether it is biologically possible to have a heart after having it stolen so many times but stand up Sahel, this one’s for you.