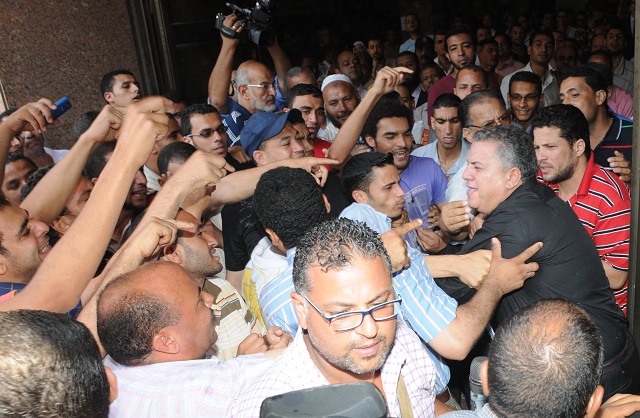 The Muslim Brotherhood’s supporters have become increasingly more cohesive and direct about their position over recent judiciary rulings that have fallen against their favour and civilian opponents alike.

Later the same day, Egyptian human rights lawyer and activist Negad El-Borai was sprayed with water by Morsy supporters while other lawyers and judges had to endure accusatory chants from the crowd calling them remnants from the old system.

The attacks didn’t stop there however. One liberal MP, Hamdi El-Fakhrani, told Al-Ahram that he had been assaulted outside the court by members of the MB, believing he “could have died if the police hadn’t intervened.”

El-Borai lashed out at the MB, calling the attacks “fascism” and “an attempt by the Brotherhood to terrorise whoever opposes them.”

Meanwhile Dr. Abdul Rahman Al-Barr, a theology professor at Al-Ahram and member of the MB’s Guidance Bureau, has told the Ikhwanweb, MB’s official website, that such acts are nothing more than the desperate attempts by certain security officials to vilify the Brotherhood by tarnishing its reputation.

The Supreme Constitutional Court’s decision declaring Morsy’s decree invalid sparked anger on Tuesday as thousands of Brotherhood supporters as well as Morsy backers crowded Tahrir Square. All these actions show a deep divide between the Brotherhood and its supporters on one side, and everyone else on the other.

The response has been unsurprising considering how the judiciary and the SCAF have openly worked to curb the power of members of the group which until recently had been marginalised and imprisoned at length.

It is no small wonder SCAF is reluctant to have a power block in Egypt which rivals them, much less a power block which was once persecuted by the old regime.