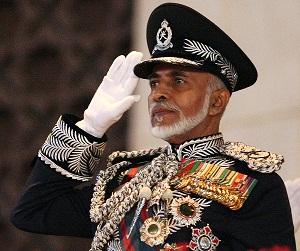 Four Omani activists were sentenced to prison on Monday by the Criminal Court of First Instance in Muscat, according to the United Arab Emirates-based news service, Gulf News.

Three of them, Hamad Al-Kharusi, Ali Al-Meqbali and Mahmoud Al-Rawah, were sentenced to a year in prison while the fourth, Hammoud Al-Rashidi, was sentenced to six months, according to Gulf News. They are accused of defaming the Sultan Qaboos bin Said Al-Said, the Sultan of Oman who has ruled the country since 1970 when he overthrew his father.

The activists have been released on bail pending the appeal. The Dublin-based human rights organisation Front Line Defenders called on the Omani authorities to “immediately overturn the conviction of” Hammoud Al-Rashidi and Hamad Al-Kharusi and condemned their sentencing.

These men are part of a group of activists who had been arrested through May and June when the government started a campaign targeting online activists. Hammoud Al-Rashidi and Hamad Al-Kharusi were arrested on 8 June. According to the BBC, there were also activists arrested on 11 June after protesting in solidarity with bloggers and writers who were arrested earlier in May. All of those who have so far been arrested are believed to have been released.

Omani activists are repeatedly harassed by the government, according to Front Line Defenders. On 13 June, Human Rights Watch released a statement urging the Omani authorities to “halt a sweeping crackdown on political activists and protesters.”

Following in the footsteps of the Bahraini authorities, who ordered the demolishing of the Pearl Roundabout, Omani authorities earlier this month ordered the removal of a globe monument from Reform Square which largely became the symbol of revolution for Omanis in the city of Sohar north of Muscat, according to the Bahraini news service, Sot el-Manama (the Voice of Manama).

The square which was previously known as the Globe Square was renamed Reform Square and has largely been the centre of the revolution in the city. This most recent move by the government to quell protester’s demands has angered activists.

Oman, a country of approximately 3 million, is a member of the Gulf Cooperation Council. Like many countries in the Arab World, it witnessed pro-reform demonstrations at the beginning of 2011.

Demonstrators who were met with police violence demanded reform, an end to corruption and objected to the high costs of living. The protests in Oman started mid-January 2011 before the Egyptian revolution. In March, the New York based Human Rights Watch, described the methods used by Bahraini security to quell a demonstration as “lethal“. Many insist that demonstrators never demanded the ouster of Sultan Qaboos and that they only wanted reforms.