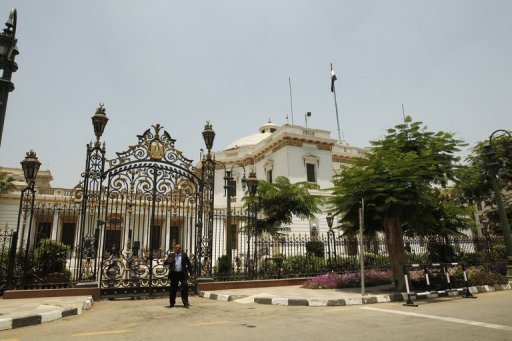 The first day of President Mohamed Morsy’s reinstatement of parliament, was short-lived. Hundreds of people crowded the gates as parliamentarians came and went for the first session in a month.
They were a deeply divided group, with around 200 Morsy supporters camped immediately outside the entrance, while another 40 who opposed the decision stood across the street bitterly looking on.

Some politicians drove through the crowd in expensive cars with tinted windows and curtains drawn over backseat windows whilst others were eager to speak to the people.  Parliamentary representative Essam al-Sabahy of the liberal Al-Wafd Party was one of the members who defied his party’s high board’s decision to boycott the session.  He spoke to a crowd of supporters affirming “Morsy’s decision is in respect to the courts’ rulings, not the other way around.”

In regards to reports of the Wafd Party’s protest of the parliament meeting, Al-Sabahy said that “the decision to boycott today’s session was that of the high board of the party, not parliamentary body.”
Al-Sabahy went on to criticise the Judges’ Club, saying they should not have involved themselves in political matters as they did on Monday when they demanded the decision to dissolve parliament be respected.

Another parliamentary representative for the Wafd party who also attended Tuesday’s session, Dr. Ahmad Mahmoud Abdallah, told the Daily News Egypt that attending the session was not against the Wafd Party’s decision.  He clarified that while the party announced boycotting the meeting, they said nothing about the individual members not being allowed to attend it.
“Al-Badawy [head of the Wafd Party] sent some of the Wafd members of parliament personal messages hoping that we do not show up to the session until we meet with him,” Abdallah said.

Despite their official stance, many of the party’s parliamentarians arrived for the Tuesday session.
“Almost 7 to 10 members of Wafd made it to today’s session.” Dr. Abdallah confirmed. “I cannot verify the number though because it was such a short session.”
The first meeting of the reinstated body was largely committed to speaker of the assembly, Saad Al-Katatny, running through the events that have occurred since parliament was dissolved 24 days prior. Al-Katatny also announced the members› decision to defer a ruling on the fate of one-third of the assembly to the Cassation Court.

“The court should investigate the legitimacy of each MP’s membership individually,” Dr. Abdallah said, explaining that this way parliament would know which members were deemed illegitimate instead of dissolving the body in its entirety.
Outside the People’s Assembly, Abdallah made clear he respected the Supreme Council of the Armed Forces, but he also said they overstepped their bounds.
“SCAF is a highly respected council, it’s our honour,” Abdallah said. “Yet, its job is to protect us and secure us, and all this talk about parliament’s legitimacy is up to constitutional experts.”

The Wafd member’s speech reached such a crescendo that the crowd lifted the politician onto their shoulders and chanted, “There they are! There they are! The members of parliament, there they are!”
The anti-Morsy group across the street said that Morsy’s decision to reverse parliament was illegitimate and they refused to recognize his presidency.  They chanted, “Void! Void!”  A pro-Morsy supporter dismissed the smaller group saying they were simply being paid to come criticise Morsy.

“I came to support the president’s decision.” Naglaa Salah, a veiled woman who stood in front of the assembly hall with her sister and daughter, told the Daily News Egypt.
Salah said that she shall stay until “Morsy’s decision is implemented; not that of the corrupt government or the corrupt media”. Upon being told that the decision is indeed implemented and parliament is indeed meeting, Salah told the Daily News Egypt: “Then I shall be gone.”
Salah voted for president Morsy in both the first and the run-off rounds of the elections. She also voted for members from the Freedom and Justice party and Al Nour Salafist party during the parliamentary elections. She said her reason for electing Islamist politicians is that, “whoever truly knows Allah would never be unjust to the people”.

While Dr. Abdallah was orating to the crowd, Freedom and Justice Party MP Hassan El-Prince hurried around the outskirts of the masses.  Supporters peeled off from the sidewalk to come shake his hand and offer their appreciation.
He smiled obligingly, but would not talk long – he was in a rush to catch a cab to continue business at the courthouse.