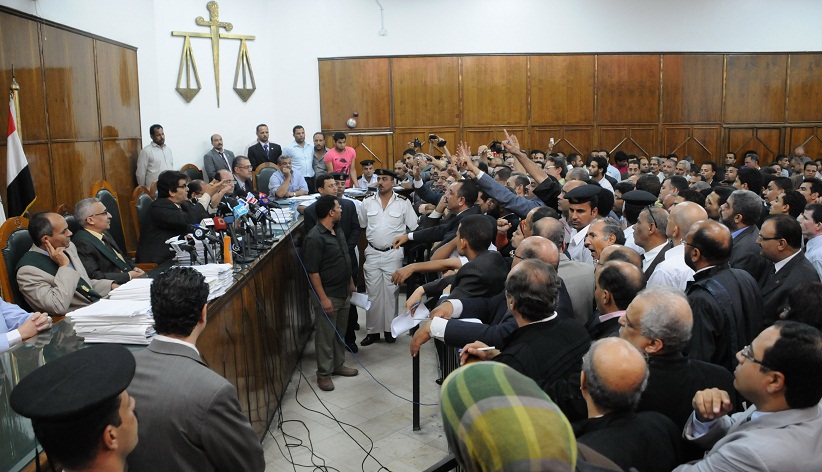 The Supreme Constitutional Court (SCC) revoked President Mohamed Morsy’s decision to reinstate the People’s Assembly on Tuesday night, pitting the president against the judiciary over the assembly’s constitutionality.

Yasser Aly, the President’s spokersperson responded to the ruling, “The SCC has no jurisidiction to rescind the President’s decision, therefore the ruling is invalid and null.”
“This is the proper legal procedure since the court is the sole body that can rule on constitutionality,” Rafaat Fouda, constitutional expert and Cairo University professor, said. “We are neither in a presidential or parliamentary system. The court has placed the president back in his place.”

Upon the news, crowds in Tahrir Square broke into chants of ‘the people demand the execution of the decision.’ Crowds at the Administrative Court, who gathered to support Morsy’s decision, await news from several cases challenging the president’s decree, the reinstatement of the Shura Council, and the Supreme Council of Armed Forces supplementary decree, moved to Tahrir after the cases were postponed.

The SCC met on Tuesday to review cases filed against President Mohamed Morsy and his decision to reverse its ruling on dissolving the People’s Assembly, the parliament’s lower house. Plaintiffs demanded the president’s decree be overturned as it violates a court ruling: a power no member of government has, not even the executive branch.

The plaintiffs said the SCC’s decision is meant to be final and that all state institutions, including the presidency, must respect them.
Prominent Muslim Brotherhood member and constitutional expert Sobhy Saleh, who is also a member of the People’s Assembly, attended the session in defence of Morsy’s decision.
Saleh used two previous rulings by the SCC in 1987 and 2007 to show that the presidential decree was valid. In 1987 the court also ruled the parliamentary elections law unconstitutional.

Former President Hosni Mubarak put the matter to a popular referendum before dissolving parliament, however, and although there were cases brought against the referendum, the SCC itself ruled that Mubarak’s decision was a sovereign one and could not be appealed.

Saleh argued that the current situation is much less grave than calling for a referendum since Morsy is only reinstating the assembly back temporary before holding new elections within 60 days of a new constitution.

The 2007 ruling Saleh used to make his case was one where the SCC ruled that the original court that refers a law to the SCC is the one that makes the final decision not the SCC itself.

Nasser El-Haffey, the lawyer officially representing the presidency, accused the Supreme Constitutional Court of forgery and called on the panel to recues itself from viewing the case.

El-Haffey said that he had evidence that the Supreme Constitutional Court’s verdict on dissolving the People’s Assembly was printed at the Al-Ameeria printing house even before the court announced the actual verdict, meaning that the decision had been taken before hand.

The accusation was met with silence from the court panel.