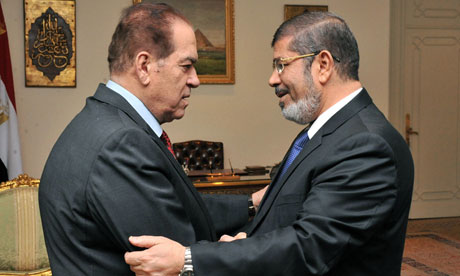 The new prime minister is expected to be announced sometime today, either before or after President Mohamed Morsy travels to the Kingdom of Saudi Arabia, according to his official spokesperson Yasser Aly.

The announcement will come as legal challenges swirl around the president’s recent decision to reinstate the People’s Assembly, a directive that has pitted Morsy against the judicial and military branches of government. Morsy seems determined to push his agenda as the first elected president following the ouster of Hosni Mubarak in an environment where the military and judiciary have determined his political parameters and authorities.

There has been much speculation about the candidates for prime minister. Similarly, rumours have also swirled around candidates for potentially three vice presidential slots, who Morsy said would represent Coptic Christians, women and an independent candidate.
The prime minister will have to appoint a new cabinet once his name is finally revealed. Egypt’s current Prime Minister Kamal El-Ganzoury resigned following Morsy’s victory. His tenure ends once Morsy appoints a new prime minister.

Despite his decision to step down, there were rumours El-Ganzoury would be appointed by Morsy. There were also rumours circulating that Morsy would appoint himself as prime minister. If Morsy would name himself prime minister, it would have historical precedent. Previous presidents of Egypt like Gamal Abdel Nasser and Anwar El-Sadat have at some point in time during their presidency named themselves prime minister.

Right after Morsy’s election as president, there was talk about former head of the International Atomic Energy Agency, Dr. Mohamed El-Baradei, being his future prime minister. Speculation mounted after El-Baradei was seen in the front row of Morsy’s third oath of office at Cairo University.
There have also been unconfirmed reports that Morsy may appoint Khairat El-Shater, a member of the Muslim Brotherhood and the Brotherhood’s initial candidate for the presidency.