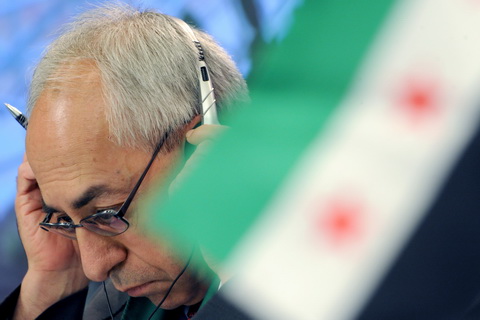 In a surprising turn of events, Moscow has hosted a meeting with the Syrian National Council (SNC) on Wednesday to discuss possible solutions to the Syrian crisis. Russian Foreign Minister Sergie Lavrov met with many members of the SNC including the Kurdish Abdel Basset Sayda, head of the SNC.

According to the Russian Itar-Tass news agency, Sayda brought with him a set of detailed proposals outlining solutions for the Syrian crisis.

“We have arrived here in order to look, together with Russia, for ways leading out of the crisis in Syria,” Sayda explained.

The meeting comes just days after Russia pledged not to supply new arms to the Bashar Al-Assad regime while there is continued bloodshed, although it is not clear if existing contracts will be nullified or if Russia will still deliver on pre-existing agreements.

Since, Russia’s veto powers within the United Nations Security Council (UNSC) prevents any kind of tangible solution to be achieved within the context of a UN-backed resolution, and Kofi Annan’s six-point plan and numerous meetings with Al-Assad have yet to bear any fruit, it seems likely that the SNC are willing to look outside of the UN for a resolution.

Russia has called for talks which would include Iran, Al-Assad and the SNC, a move that has left many Western powers such as the United States feeling uneasy. In light of this proposal a member of the SNC executive board, Basma Kodmani, has ruled out the possibility of any negotiation with Al-Assad.

According to the Russian news agency RIA Novosti, Kodmani said the SNC was against holding “talks with the ruling authorities.”

Despite Russia’s support of finding a solution which did not involve the removal of Al-Assad, Kodmani was reported saying that the SNC believe Russia’s importance to Syria cannot be underestimated, and she hopes Russia will “help us turn the page of the old regime and transform to the new democratic order,” according to RIA Novosti.

Sayda is of Kurdish ethnicity, the largest minority group in Syria.

His appointment as head of the SNC has brought back into light the dire situation of the Kurds, a people with no home state living largely without sovereign recognition, caught mainly in the border regions of Turkey, Syria, Iraq and Iran.

In Syria, the Kurdish plight has been met with a marginalisation of their culture, language and history; with Kurdish books being banned, schools being shut down whilst the language and culture being phased out.