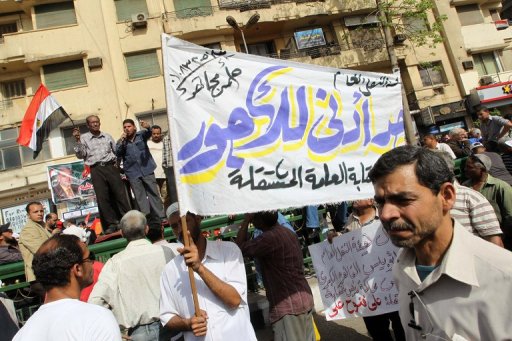 In light if the growing number of strikes across the country, Dr Ahmed El-Boray, former Minister of Labour, stressed the need for the government to carry out collective negotiations with workers in order to put an end to incidents of industrial action which have become a considerable threat to Egyptian production.

El-Boray stated that the disturbances currently occurring in private sector companies and factories are unjustifiable, and that some of them have been planned to repel investors, noting that some workers are refusing to negotiate and are making unlawful demands.

He also called on workers’syndicates to support negotiations between workers and the owners of companies in order to produce new collective bargaining agreements.

Current labour laws are sufficient and do not need to be amended, El-Boray explained, but workers and company owners must begin negotiating. He criticised workers for striking before exploring other options to resolve their problems.

He noted that one factory ownedby an international company had been closed for 45 days because of strikes, a situation that mars the economy and the workers themselves.

Adel El-Ezaby, an official in the Federation of Egyptian Industries, said that the current tensions are a result of the law simply not being implemented, regardless of whether or not it needs to be amended.

He said that it was necessary to respect the law for justice to be done.

He added that another reason for the strikes was the shallowness of the culture that governs societal relations in Egypt either on the personal level or between syndicates and businesses.

El-Ezaby stressed the establishment of a working group composed of business associations, government agencies, and workers syndicates as quickly as possible away from sensationalist media scrutiny.

What is happening at the Cleopatra Group is an indication of the lack of seriousness about protecting either current or expected investments in Egypt.

EL-Ezaby noted that talk of forming a committee to direct the Group’s activity blatantly disregards the present and future of Egypt as it sends a clear message to investors about the deterioration in the ethics guiding investment.

He added that property seizure is constitutionally prohibited and that it similarly sends an extremely negative message to foreign investors saying that it only takes a minute to destroy confidence, but many years to build it.

YosryBaioumy, secretary of the Egyptian Workers’ Fund, said that the workers have legitimate grievances, but that they should not be arbitrary in their demands.

He explained that the Ministry of Labour must play a role in resolving the disputes and that it must come up with a law governing the freedoms of workers’ syndicates.

A new law will help ameliorate the problem by allowing workers to elect their own representatives which would make workers less likely to refuse to negotiate.

Abdelhamid Abdelgawad, head of the public Egyptian Medical Syndicate, stressed the need to end the strikes and for workers to return to their jobs saying that continuation of instability in this regard presents a serious threat to investment.

He added that independent syndicates are raising the ceiling of their demands and that some business owners have been forced to agree to unfair demands.

He claims that the only solution to the workers’ protests is to close independent syndicates as they spread rumours and discontent among the workers.

Ahmed Abdelzaher, head of the Egyptian Workers’ Federation, said that his organization cannot wave a magic wand and solve all the workers’ problems but that it can take their demands into account and submit them to the concerned agencies.

He stressed that the Egyptian Workers’ Federation formed a commission ten months ago to solve labour problems and settle disputes.

“We requested a one year period of calm,” he said, noting that the federation asked the government to address the workers’ demands in a letter sent to President Morsy last Thursday.

Abdelzaher added that syndicate freedom does not necessarily mean their multiplicity and that the United States, the United Kingdom, and Germany often allow only one syndicate for each industry.

The head of the public Union of Public Transport Workers, Gebaly Mohamed, made the claim that all strikes and disturbances had been called for by independent unions.