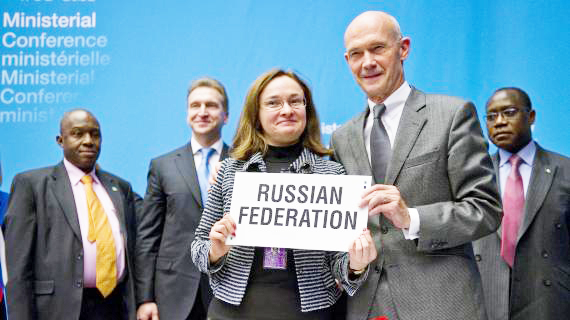 Moscow (AFP)-Russia’s parliament on Tuesday voted to ratify WTO membership, a historic move which the government says will boost productivity but the opposition claims will bear a heavy social toll.

The vote was the last major hurdle for Russia’s accession to the World Trade Organization as deputies from opposition parties presented a rare united front in arguing it will hurt the Russian economy.

A team of ministers faced the Russian Duma where they were bombarded with questions before a vote of 238 to 208 with one abstention, unusually tight for the parliament that frequently is little more than a rubber-stamping tool for the Kremlin.

The final vote plants Russia firmly in the world economy as it is expected to be swiftly approved by the Federation Council upper house and then signed by President Vladimir Putin.

The bill was supported only by lawmakers in the majority party United Russia, Russian news agencies reported, but even the party’s Alexei Pushkov, the parliament’s foreign affairs committee chief said the move is risky.

“Joining the WTO is like jumping into an ice hole,” he wrote on Twitter after the vote, referring to the popular Russian winter pastime of swimming in frozen waters.

“If one makes it out, he becomes healthy, if he’s carried off by the current, he should not have jumped. The outcome is not clear.”

Communist parliament members said in the debate that WTO membership would flood the country with cheap imports, killing the remnants of Russia’s Soviet-inherited industry and creating unemployment.

“What does Russia want from this besides satisfying the vanity of its current rulers?” said top Communist deputy Sergei Reshulsky, arguing that Russia would face a trade imbalance in almost every field as its economy was already hurt by capital flight and corruption.

“In essence, we have nothing to sell besides weapons and fertilizers,” he said. “Why go to the WTO to play the role of a consumer?”

The Communist Party previously joined radical left movements to stage several protests against the WTO, and some activists brandished banners outside the Duma building in Moscow on Tuesday.

Russia will be the largest economy to join the WTO since China made the leap in 2001.

Senior government officials assured the lawmakers that the move will bring investment to Russia and give it more powerful negotiating status.

“There will not be any negative social consequences,” Economic Development Minister Andrei Belousov countered, arguing that people will profit from the membership due to competitive prices.

“Until we take on responsibilities (of the WTO), we are not understandable to our trade partners. They don’t know if we are planning to play cards or football,” he said.

“Preparing (for WTO) we expanded federal programs… it’s a response by the government and you the lawmakers to the fact that we will experience certain pressure from outside,” Shuvalov said.

Russia’s accession to the WTO was agreed by the organization after a sometimes tortuous saga that required 18 years of negotiations and was marked by frequent snags and mutual recriminations.

The membership was one of the key international agenda items during the presidency of Dmitry Medvedev, who secured support from the U.S. for Russia’s entry as one of the products of the two countries policy of “reset.”

Putin has also praised potential accession as a way for Russia to gain “non-discriminatory access to foreign markets” and lobby its economic interests internationally.