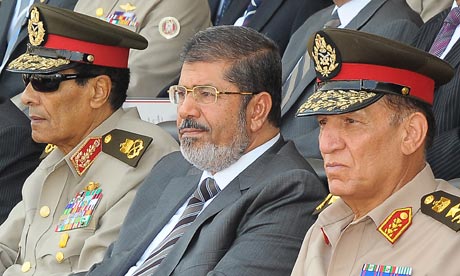 The Supreme Council of Armed Forces will dictate all laws in regards to the military in the new constitution, further leaving matters of the military outside of civilian control, according to the outcome of the System of Governance Committee of the Constituent Assembly meeting on Monday.

Members discussed articles and clauses relating to the military and its leadership. The committee addressed the possibility of ensuring the independence of the Armed Forces institution.

Supreme Council of Armed Forces member and Assistant Defence Minister for Legal Affairs MamdouhShahin, who is a member of the committee, asked that the military be allowed to govern itself and issue its own laws without interference from other bodies.

Essam El-Erian, the Deputy and Acting Chairman of the Muslim Brotherhood’s political wing, the Freedom and Justice Party, argued against the proposition and said it would lead to Egypt having “two legislators” in reference to parliament and the military.
Shahin answered by saying that military laws only affect military personnel and the remainder of the committee sided with him on the matter.

The committee also discussed compulsory conscription and banning any political parties or groups from the creation of militias and paramilitary bodies.

The System of Governance Committee’s Executive Branch Sub-committee decided that the president would merely be the head of the executive branch and would not be an arbitrator between the executive, legislative and judicial branches like in the previous constitutions, but would merely ensure there is a proper separation of powers.

Committee members said that the system of governance is likely to be a mixed one rather than presidential or parliamentary and that both the president and parliament would have authority over the cabinet.

There will be a clause in the new constitution allowing parliament to impeach the president and try him for treason or disrespecting the constitution if two-thirds of its members vote for such a measure, adding more oversight over the president than previous constitutions.

Former Arab League chief and presidential candidate Amr Moussa suggested an article stating that “the people are the source of all authorities and they alone practice and protect sovereignty” which was approved of by all committee members.