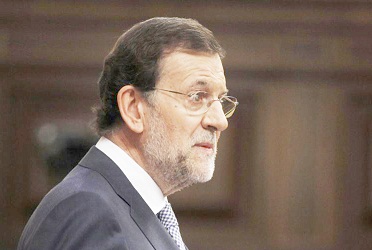 Rajoy, interrupted by howls from opposition members as he outlined the steps, performed a U-turn by raising value added sales tax after having promised he would not do so, and took an axe to state expenditure.

“These are not pleasant measures but they are necessary,” said the premier, as outside the building protesters against mining subsidy reductions threw rocks at police, who responded with batons and rubber bullets.

Rajoy reminded parliament that Spain is going through one of its worst recessions in history, with unemployment at 24.4 percent and economic activity set to decline by nearly two percent this year.He said new spending cuts and other measures, including notably a rise in value-added tax, would bring in 65 billion euros by the end of 2014 to help trim the annual deficit.

The European Union had demanded a VAT rise along with a series of other tough measures as it gave Spain an extra year to bring its bulging public deficit back to agreed limits.

The interest rate that investors demand to hold Spain’s 10-year debt fell sharply after the measures were announced but remained at the still crippling level of 6.504 percent, down from 6.773 percent on Tuesday.

Key measures announced by the bearded 57-year-old leader of the conservative Popular Party were:
— VAT goes up to 21 percent from 18 percent, and the reduced rate on some products such as food goes up to 10 percent from eight percent.

A special four-percent rate on basic needs such as bread is untouched.

— Certain bonuses paid to top civil servants will be cut, and the Christmas bonuses for top public officials will be eliminated.

— Environmental taxes will be reformed to comply with the “polluter pays” principle. Tobacco taxes, too, are to be targetted.

— Tax relief on mortgage payments for new home buyers will be eliminated as of 2013.

In Brussels, eurozone ministers agreed the previous day to provide a first slice of 30 billion euros for Spain’s banks this month, with 100 billion euros potentially available in all.

The 17-nation single currency bloc agreed, also, to extend a deadline for Spain to cut its public deficit to the European Union’s limit of 3.0 percent of gross domestic product by one year to 2014.

In return, Madrid had to enact further austerity. It had already approved in March a budget for 2012 that squeezed out 27 billion euros in spending cuts and tax increases.

“Compared to previous packages, the measures this time seem relatively straightforward to implement and will be hard to evade for tax payers,” said Christian Schulz, senior economist at Berenberg Bank.

Worries about the economic outlook for the eurozone and Spain mean that the previous austerity package would still likely fail to raise the promised revenue, the London-based analyst said.

“The July measures should do more to increase the credibility of the Spanish reform efforts vis-a-vis sceptical northern European leaders,” he said in a report.

During Wednesday’s protest march, tens of thousands strong in the Spanish capital, some young men threw rocks and firecrackers at riot police who beat them with batons and fired rubber bullets.

Violent clashes had already broken out between miners and police in weeks of protests in northern mining towns over Madrid’s decision to slash coal industry subsidies this year to 111 million euros ($136 million) from 301 million euros last year.

Unions say the cuts will destroy coal mining, which relies on state aid to compete with cheaper imports, and threaten the jobs of some 30,000 people directly and indirectly employed by the sector, including 8,000 coal miners.

Meanwhile in neighbour Portugal, a eurozone country which has been rescued by the European Union and International Monetary Fund, doctors began a two-day strike against cuts in the budget for health services.