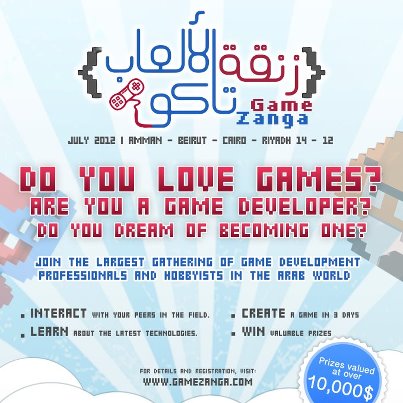 Quick, what does the word ‘hacker’ mean to you? If you pictured Pentagon breaches and an almost prepubescent Angelina Jolie, you’re wrong. What is more, Tarek Ahmed, 23, Hardware Hacker and co-founder of the Cairo Hacker Space, assures us you are soiling the name of hackers everywhere.

Hackers, Ahmed says, were once simply people who were good at what they did and as attacks on computers and systems increased, the media simply starting painting those responsible as ‘hackers’. “A hacker is like a guy with a knife- with capability,” Ahmed explains. “You can use the knife to cut some nice apple slices or you can hurt people.”

A hacker is also not just limited to the computing field. Food hackers, engineering hackers or electronics hackers are all part of the spectrum. Or in this case, games hackers.

Ahmed’s organisation, the Cairo Hacker Space, is teaming up with workspace innovators The District and Jordanian gaming moguls GameTaco to bring Cairo an event known only as The Gaming Hackathon.

Using your newly-minted hacking definitions, we expect you have put two and two together. The hackathon is a three day event, lasting from 12 July to 14 July. Participants will neither rest nor sleep as they toil for three straight days to develop, and then upload a game onto the GameTaco site, where the games will then vie for dominance and prizes.

The event will be held at the District’s facilities in Maadi, with the Cairo Hacker Space doing what it does best, “Bringing people interested in being creative together and providing them with the tools and components they need to have fun and explore,” according to Ahmed.

The event is a wake-up call, reminding us that among the many burgeoning Cairene undergrounds – music underground, art underground, underwater basket weaving underground – ultra-creative hackers are firmly entrenched. “When we started Cairo Hacker Space in 2009, it was purely virtual. We were the first concept like this in the Middle East and Africa, and we had maybe five people in my friend’s apartment,” recounts Ahmed. “We were mostly engineering students and we needed a place to work on our graduation projects. After we finished and graduated, we kept on providing this place to other people who needed it to be creative.”

Speaking of the group’s current popularity, Ahmed says “We expanded like crazy. We held events in the Alexandria Library and now they have the Alexandria Hacker Space. We now have our own place filled with tools and people. There are hundreds going in and out but there are 20 members who never move from there.”

As Ahmed recounts more and more of the group’s history and exploits, it becomes almost astonishing that the group is not more famous. Ahmed tells me about one particular youth, only 15 years old, who is more than a whiz kid. He is the person everyone at Cairo Hacker Space goes to when they have technical problems. “His name is Aaser and he hasn’t taken his thanaweya amma, [national highschool test], yet,” says Ahmed with a chuckle.

Another story is about when the group turned a broken old mobile phone into a projector. When asked whether these projects are for sale, the distaste is apparent. “When someone comes to us and says ‘I need a space to build something to sell’, we don’t turn him away but I always wonder why. It is more important that you have fun and do what you love,” says Ahmed almost sagely.

“That is also why we got involved in the hackathon. There are prizes for the winners of course, but we just want to bring the community of hackers closer together. Before you used to make the game in your house and send it in, but we made it in the District so everyone would show up and have a good time together.”