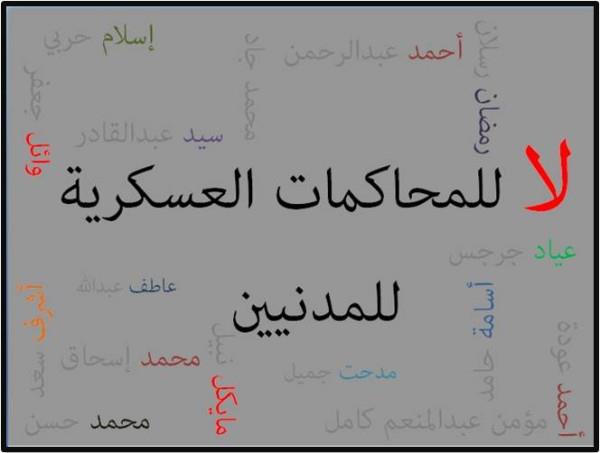 Three members of the Egyptian Social Democratic Party were arrested yesterday by military police as they participated in a march against military trials calling for the release of all political prisoners and detainees.

Islam Amin, Karim El-Kenany, and Mohamed Massoud were marching alongside other activists last night in Nasr City when they were attacked by plain-clothed thugs and arrested by military police officers. It is unknown where they were taken.

The party released a statement condemning the incident and demanding their release.

“The Egyptian Social Democratic Party demands the immediate release of our colleagues as well as all civilians arrested by the military. The party holds President Mohamed Morsy responsible for not fulfilling his repeated promises of releasing political activists that were falsely arrested,” the statement read.

The EDSP statement called on Morsy to quickly fulfill his promise, otherwise it would become apparent that he was either making false promises or that he was unable to fulfill them, suggesting that the Supreme Council of Armed Forces held real power, not the president.

There have been almost 12,000 civilians arrested and subjected to military trials ever since the January 25 uprising that toppled former President Hosni Mubarak.

SCAF, the military council that took over following Mubarak’s ouster, argued that such tribunals were necessary to restore peace and stability because the civilian justice system was slow.

However, a large number of those arrested by the military have been participants in anti-SCAF demonstrations and protests.

Before assuming power from SCAF, Morsy promised he would release all political prisoners subjected to military trials. Upon assuming office he ordered the formation of a committee to review all cases of civilians tried in military courts.

The committee has been criticised by activists and the No Military Trials for Civilians movement for including Ministry of Interior and military judiciary officials who they say sent the detainees to prison in the first place.

Mahmoud Abdel Bary, a State Council judge and committee member announced today that there had been 11,879 civilians detained by the military since January 25, 2011 in incidents related to the revolution.

According to Abdel Bary, 9,714 prisoners have been released, either having been acquitted or receiving suspended sentences, leaving 2,165 detainees still imprisoned.

Abdel Bary added that the committee would also review the cases of civilians arrested by the military or subjected to military trials in incidents that are not related to the revolution.