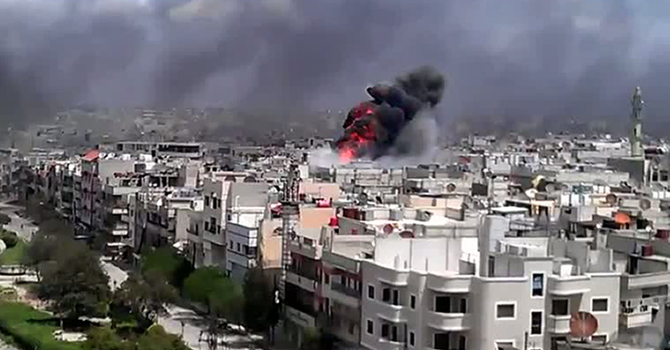 News reports have been circulating that a possible movement of chemical weapons within Syria is underway. Sources from within the Syrian government have indicated to British and American intelligence officials that stockpiles of sarin nerve agent and mustard gas, considered to be among the largest stockpile of chemical weapons in the Middle East, are being moved to the eastern city of Homs.

It is unclear whether the movement has been authorised by President Bashar Al-Assad. According to the reports, there are four sites in Syria producing chemical weapons: Latakia, Al-Safira, Hama, and a center in the capital of Damascus.

The stock is then stored in Hama, Masyaf, Palmyra and a smaller facility in Furqlus.

Sarin is a powerful nerve agent capable of killing thousands of people in a single attack in specific weather conditions and is hard to detect once it has been dispersed.

The reports come after the violence that raged in the Syrian town of Tremseh on Thursday which has sparked a global backlash to the bloodiest day since Syria’s 16-month uprising began. Among those who have since condemned the Syrian government for using widespread violence are the US Secretary of State Hillary Clinton, the Secretary General of the United Nations Ban Ki-Moon, and the Egyptian President Mohamed Morsy.

Still the international community is stalled on action on Syria. Secretary Clinton slammed Syrian leader Basher Al-Assad, saying the events in Tremseh were “indisputable evidence that the regime deliberately murdered innocent civilians.” The Hama Revolutionary Council in Syria released a statement on Friday, claiming that over 220 people had died. Clinton demanded the United Nations Security Council send a stern warning to Al-Assad’s regime, saying “who committed these atrocities will be identified and held accountable.”

“History will judge this council. Its members must ask themselves whether continuing to allow the Assad regime to commit unspeakable violence against its own people is the legacy they want to leave,” said Clinton addressing  the Security Council.

Some are not yet ready to call the events in Tremseh a catastrophe. According to a BBC correspondent in Syria, the opposition has yet to produce an extensive list providing the identities of those that have died, something they normally do to demonstrate the presence of civilian casualties. The videos and pictures released by activists and opposition members showed mainly bodies of men of fighting age, affirming the message of the state which claims that this was a military operation against rebel militants.

Those weary of the idea of intervention also point out that threats of chemical attack were used to mobilize a reluctant international response in Iraq in 2003. No chemical weapons were found after a full scale intervention was conducted.

Morsy lashed out against the Syrian regime but told reporters he felt that violence was not the way to solve the crisis.

“We fully support the Syrian people’s revolution, we should work to stop the bloodbath in Syria but using force is not the solution,” Morsy affirmed. The sentiment was also shared by his Tunisian counter-part Moncef Marzouki, who is currently visiting Morsy in Cairo.

Although the international community may be divided on how to solve the Syrian crisis, the true split is not who is to blame for these killings, but rather the various economic trade partnerships that some countries have shared with the Al-Assad regime. Countries such as Russia and China want to protect their trade agreements with Syria. Their permanent seats on the Security Council and their powers of veto have rendered the United Nations ineffectual.

Ban Ki-Moon has also had harsh words for Assad condemning, “in the strongest possible terms, the indiscriminate use of heavy artillery and shelling of populated areas.”

He warned Al-Assad that there would be serious consequences if he continued to ignore the demands set forth in Annan’s six-point plan.

Syrians have resorted to arming themselves, in a war which has pitted soldiers against civilians, civilians against each other and strained relationships between pro- and anti-Assad supporters. The weapons have come from surrounding countries such as Turkey in clandestine operations like those reported by Haaretz on 21 June. The arms they have received are largely dependent on silent donors, but with no clear, unified opposition group within the country many have felt frustration toward the Syrian National Council.

According to the New York Times, a meeting between various Syrian rebel commanders in Turkey highlighted the issue clearly.

“Yesterday we were supposed to receive mortars and cartridges,” said commander Issam Afara, while addressing other commanders. “But we didn’t receive them. I called and demanded: Where are they? Where?”

In the 16 months that has seen over 17,000 people die in violent crackdowns and military operations, the rebels have hoped for United Nations resolution to the crisis several times, but the UN has been unable to forge a promising resolution due to several member states refusal to enter in serious multiparty talks. China and Russia, who hold veto power in the security council, have blocked attempts by member states who have sought harsher repercussions on the Al-Assad regime.