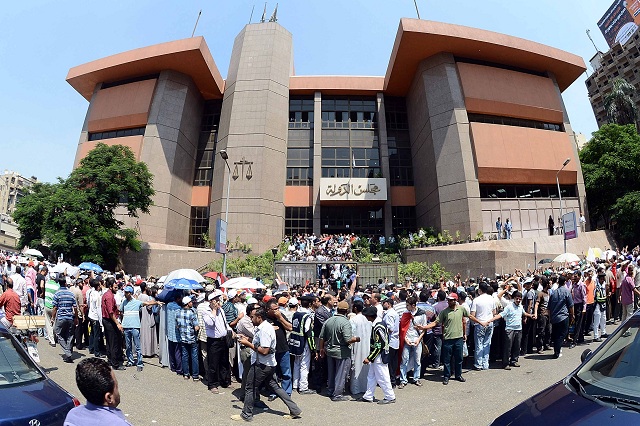 The paralysis in Egypt’s Parliament may soon by joined by the troubling developments in the Constituent Assembly, including its possible total dissolution this Tuesday.

If the assembly is disbanded it would further throw Egypt’s transitional process into more disarray, challenging President Mohamed Morsy to find a solution with the limited powers granted to him by the ruling generals.

The Administrative Judiciary Court was set to rule on the dissolution of the Constituent Assembly last week, instead it postponed its ruling to September, only to bring the final ruling forward again to this Tuesday. Abdel-Rahman said the court must have its reasons for moving the ruling from September to Tuesday.

The assembly has engaged in drafting controversial and critical articles of Egypt’s new Constitution, which will be the foundation legal document of Egyptian political life. The third article of the Egyptian constitution garnered media attention recently, when members of the constituent assembly demanded changing the third article to that of the 1971 constitution.

However not all Salafists agreed on the change. The head of the Salafist Nour Party, Emad Abdul-Ghaffour told Shorouk newspaper, “there is no reason for that change….the issue of sovereignty being to God is known.”

Abdel-Rahman, similarly felt that the reworded amendment was not needed.

“Sovereignty to the people must be added because in the constitution you have to include values and principles that we all need to be reminded of,” Abdel-Rahman said.

Professor of law at the American University in Cairo, Amr Shalakany said the change to the third article on its own will not make sense.

“On its own, it’s meaningless, but it makes sense when you relate it to the second article which gives the competent authority to Al-Azhar rather than the Supreme Constitutional Court,” Shalakany said.

The second article of the constitution which Shalakany referred to, now reads “Islam is the religion of the state, Arabic its official language, the principles of Islamic Shari’a are the main source of legislation, the honourable Azhar is the final source of its interpretation ….”

According to Shalakany, laws will have to go through Al-Azhar “who have to see that they conform to the Shari’a (Islamic Law) before they approve them.”

“It is not a progressive institution and it is only viewed as moderate because people are comparing it to the Salafists,” he explained.

Abdel-Rahman reiterated that “unfortunately, all of the discussion on the constitution is taking a political rather than legal aspect,” which is why he believes on Tuesday, based on his own legal experience, the Constituent Assembly will be disbanded by the Administrative Judiciary Court.

Regarding the possible disbanding of the constituent assembly, Shalakany said “we will have to accept what the court decides.”