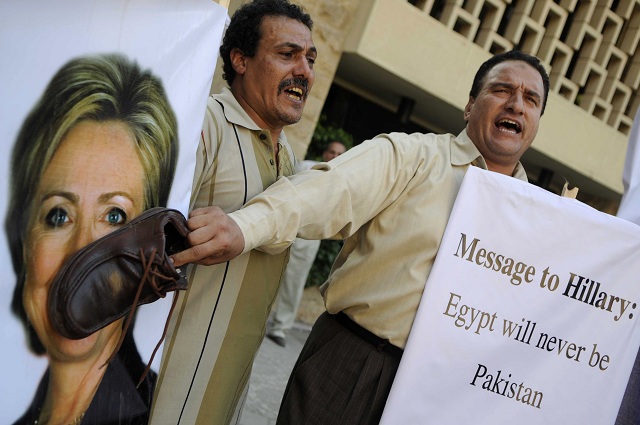 United States Secretary of State Hillary Clinton thanked Egypt’s ruling generals for safeguarding the revolution on Saturday, while similarly calling on the ‘full transition of civilian rule and all it entailed,’ during her first visit to a post-presidential election Egypt.

“We commend the SCAF for safeguarding the Egyptian people,” Clinton said at a press conference upon her arrival where she was flanked by Egyptian Foreign Minister Mohamed Kamel Amr.

Clinton visited Egypt once after the fall of ex-president and staunch US ally Hosni Mubarak, but representatives of the revolution refused to meet with her.

Once again, Clinton’s visit comes at a time when stability is far from guaranteed and newly-elected President Mohamed Morsy has not yet had a chance to assemble a cabinet or indeed cement his own authority, with a power struggle over the lower house of parliament consuming headlines.

The visit came amid numerous calls of protest from several differing political entities that were against the continued intervention of US interests in Egyptian politics. People began gathering in mass at the US embassy well before Clinton gave her initial remarks upon her arrival.

“You are supporting the hateful Islamists,” read one angry tweet directed at the US embassy in Cairo’s Twitter account, which has been under siege since the wee hours.

Political uncertainty aside, Clinton’s arrival has divided the Egyptian community down the middle. One camp views it as yet another US nose dive into Egyptian affairs, while another camp of detractors believes the visit is a part of a purported US sponsorship of the Muslim Brotherhood.

Members of the protest movement against the idea of a former Brotherhood member leading the nation said that had Clinton been visiting a victorious non-Islamist president instead, there would have been no protests.

Far from glorifying US influence, however, the 5,000 strong crowd in Tahrir on the eve of her visit simply asked Clinton recognise she was no longer dealing with the old guard.

Clinton defended the US’s partnership with the former regime and noted it was strongly opposed to several measure Mubarak had undertaken during his three decades of rule.

“So what if she’s visiting? She visited 20 other places on this trip, this isn’t special,” said Ahmed Mansour, 33, as he passed through Tahrir on his way to the subway station. “She’s just saying congratulations and Morsy is saying welcome America, welcome to the new Egypt.”

The embassy itself seemed less than concerned with the planned protests.

“We’re just so focused on the visit itself. Hilary empathises with Egypt and supports the democratic transition,” said David Linfield, the US assistant press attaché to the embassy.

He declined to comment on whether security measures had been taken to ensure the safety of embassy employees.