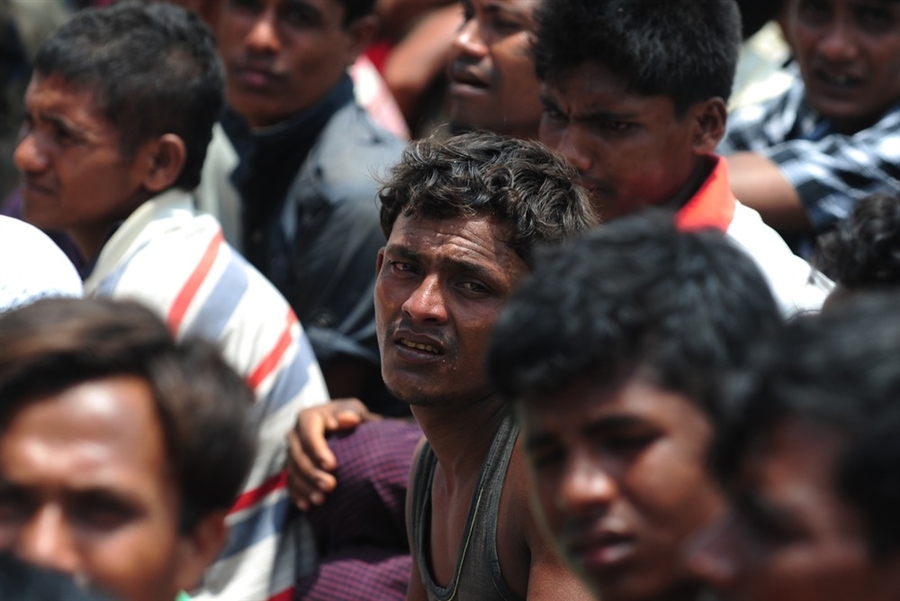 As the US continues to ease economic pressure on Myanmar, authorities continue to commit atrocities against the Rohingya minority within their borders.

While still pressuring the president to do more to expand democracy she praised the nation’s reforms, ‘‘We’re excited by what lies ahead and we’re very supportive of President Thein Sein’s economic and political reforms,’’ she said.

Her words might seem ironic to those currently working to free ten humanitarian workers from the United Nations and international NGOs detained in Myanmar since Friday.

At least one of the ten has legal charges filed against them, though Guterres said he was unaware of any charges and more information was still being gathered.

Aid workers working in Myammar are warning of an escalating humanitarian crisis in the western part of the country as military works to isolate near 80,000 displaced Rohingya into squalid camps. President Thein Sein, requested last Wednesday that the UN assist in resettling nearly one million Rohingya from his country abroad, a sort of mass deportation request which the UN denied.

According to rights agencies, the majority of relief workers focused on the plight of Rohingyans in Arakan province, where the aid workers have been abducted, have either been evacuated or have been forced to flee the violence in the last month.

Indeed, Rohingyans have been forced to flee the violence themselves. In early June, the Burmese military fired on a boat carrying refugees who were returning to Myanmar, killing nearly 50 people.

In addition to the violence, rates of malnutrition among the Muslim Rohingya, “ continue to rise dramatically” according to Tarik Kadir of Action Against Hunger.

Observers say both the Rohingyan and Arakanese carried out acts of violence during a month of rioting in June, but as recognized citizens of Myanmar, the Arakanese have largely been spared the brunt of the fallout from the Myanmar military.

The rioting was sparked by the rape and murder of an Arakanese woman. Three Muslim men were charged with the crime and in retaliation Rohingyans were attacked and several villages burned.

The Guardian newspaper reported an interview with a resident of northern Arakan Province, who described witnessing in the last week men and children as young as 12 being tortured in a police station before being “handed over” to youths in the station who burned their “testicles with a cheroot [a Burmese cigar]”  and also hit “young Muslim detainees with an iron rod,” as they pushed “a wooden stick in their anus.”

Saiful Huq, a Bangladeshi photo documentarian who has been trying to capture the stories of the beleaguered Rohingyans for four years now, said the plight of the people has been under reported.

By telephone he told the Daily News Egypt about some of the stories that have moved him to follow this important situation.

He described meeting a 17 year-old boy who had to leave behind six friends shot by Myanmar military as they tried to flee to Bangladesh. He eventually crossed the Naf river alone, a perilous journey, ending up in a camp in Teknaf where he met Huq.

The government of Myanmar does not recognize Rohingya Muslims as citizens, despite their claims to the land in Myanmar’s Rakhine province that dates hundreds of years. A 1982 law declares that Rohingyans are not citizens of Myanmar. They have been accused of being ethnically tied to neighbouring Bangladesh and are diminutively called “Kalar,” a slur against their darker skin. However, Bangladesh does not recognize the Rohingya, largely leaving them to take shelter in the homes of people in towns like Shahburi Dib, where they are largely left stateless.