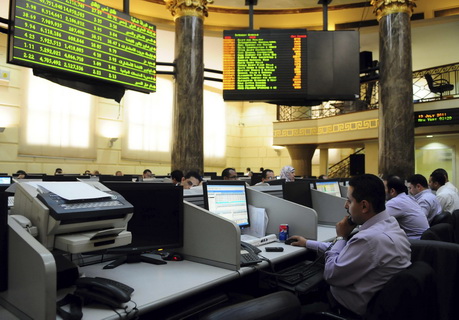 By Fatheya El-GarhiThe decline was a result of intense selling pressures brought by foreign investors in light of the continuing political tension resulting from the dissolution of the People’s Assembly.

Investor’s fears were increased by the Supreme Constitutional Court’s decision to suspend President Morsy’s decree to reinstate parliament indicates an incipient confrontation between the President and the Supreme Council of the Armed Forces (SCAF).

The EGX70 index fell 2.45% to close at 428 points, but is expected to perform better during this week, led by shipping and real estate stocks.

A report produced by Sigma Capital indicated that after rapid increases in the EGX30 index during the last few weeks, the market began to fall from its highest point at 5,022 points.

Investors did not want to become embroiled in the quick, unstable increases, noting that the gains were a secondary reaction after the steep decline that followed the market’s high point in February-March 2012 when the EGX30 hit 5,470 points.

As such, the recent gains did not reflect true strength of the market.

Hatem El-Banna, director of technical analysis for Acumen Securities, explained that political events influenced the performance of the market, adding that the market’s horizontal price movement was between the 4,900 point resistance level and the 4,700 point support level.

He predicted that the market’s horizontal movement would remain over the same price range in the first half of the current week, but that the market will break through the 4,900 point resistance level in the second half.

As for the EGX70 index, El-Banna predicted that the shipping sector will drive strong growth next week, stating that the Canal Shipping Agencies Company will make a strong contribution.

The company’s stock is currently between the EGP 7.94 resistance level and the EGP 7 support level.

El-Banna added that the fall in the value of trading last week was a result of the market’s horizontal movement, forecasting that trading would continue within the range of EGP 300-400million at the beginning of the current week.

He added that the second half of the week will see a rise in the value of trading to between EGP 500-600million.

Mohamed Saad, lead analyst with Naeem Holding, noted that the market witnessed continuous selling pressures last week as a result of profit taking, adding that most stocks reached their targets.

He said that the market is currently in a state of anticipation as to what will happen during the current week, especially with the approach of Ramadan and the reduced number of trading hours.

Saad explained that if the market continues to rise, it would be due to strong performances by Orascom Construction Industries and the Commercial International Bank.

He predicted that Commercial International Bank shares would fall to EGP 26.5, providing a good opportunity for buyers.

He noted that Hermes has an important resistance level at EGP 11.5 per share, expecting it to fall to EGP 10.8 after profit taking.

Talaat Moustafa Group’s resistance level is EGP 4.25 per share and a support level of EGP 3.5.

Last week’s sessions were divided between Arab and Egyptian buying on the one hand, and foreign selling on the other.

Institutional transactions accounted for 52.88% of market transactions, most of which were part of profit taking.