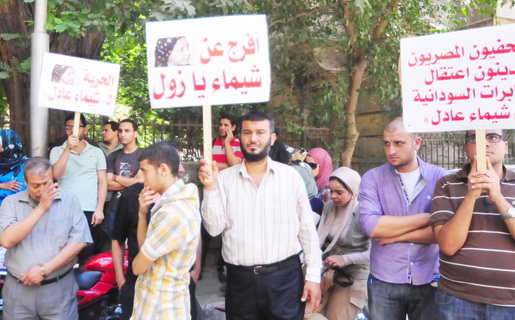 President Mohamed Morsy announced on Sunday that after speaking with Sudanese President Omar Al-Bashir, he would be returning from Ethiopia with Shaimaa Adel, the journalist detained by Sudanese authorities for covering protests in Sudan.

The news came after the president’s Facebook page announced Shaimaa Adel would be released into Morsy’s custody following a meeting with President Al-Bashir.

Adel has been in custody for 14 days in Sudan, where many feared she was being subjected to poor treatment. Sudanese state radio station mentioned Adel was released by orders from Al-Bashir, upon Morsy’s request.

Adel was the second journalist detained by security forces in Sudan, and the first working for an Egyptian newspaper. Samia El-Wardani, an Egyptian business reporter for Bloomberg News, was similarly detained to the beginning of the protests in Sudan and then immediately deported back to Cairo.

Adel is a reporter for Al-Watan newspaper. It was unclear when Adel would be released. A colleague at Al Watan newspaper said Adel had already been released by security forces in Sudan.

During the time of Adel’s detention, family members have been pressuring the government to free the journalist. Her mother went on a hunger strike to protest the detention and the lax response by Egyptian authorities and was hospitalised after her health deteriorated.

Several protests in Adel’s honour have been held at the Sudanese embassy in Garden City and the Press Syndicate. Head of the Press Syndicate Mamdouh Al-Waly had earlier promised the release of the Egyptian journalist on Monday. Adel was arrested on 3 July for covering protests against the regime of Al-Bashir. Later on, the Sudanese authorities announced she was detained for reasons not related to journalism.