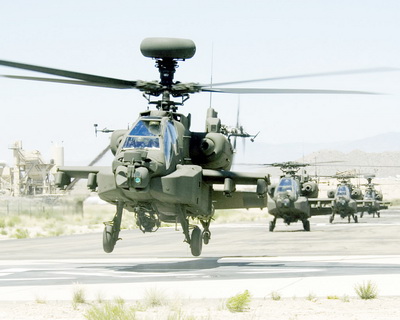 Qatar has made a bid to purchase roughly $3 billion worth of weaponry from the United States, according to a report filed by the United States Defence Security Cooperation Agency (USDSCA). The deal is known as a Foreign Military Sales arrangement. It is comprised of Apache attack helicopters, missiles, relative equipment and parts, as well as logistical support and training needed to operate the weapons.

In a notification delivered to US Congress, the agency has been cited saying that “the proposed sale of the AH- 64D Apache helicopters will allow the Qatari armed forces to replace its aging airframes with multi-mission attack helicopters, capable of meeting its requirements for close air support, armed reconnaissance and anti-tank warfare missions.”

The state has recently been refurbishing its out-dated weaponry, a lot of which dates back to the 1970s.

Strategically, helicopters are very efficient against naval units, and with the US-Iran tensions mounting in the Gulf region it is certainly in the interest of the US to bolster Qatar’s aerial and naval capabilities. The agency said it believes that the addition of updated aircrafts will provide the Qatari peninsula with long- term offensive and defensive capabilities. Tying in with western economic interests, the deal is also set to “enhance the protection of key oil and gas infrastructure and platforms.”

The deal comes as the US builds a new missile defence systems across the Gulf region to raise their defensive capabilities against Iran. Qatar is set to host one of these missile radar batteries, as they are also home to the largest US military airbase outside of the US with over 8,000 troops present.

The mounting tensions between Iran and the US has led to the deployment of additional US troops and navy vessels in the region, prompting Iran to threaten the deployment of mines in the Strait of Hormuz, a strategic shipping lane which funnels 20% of the world’s oil.

Aside from the US, Turkey has also come to an agreement with Qatar by signing a military cooperation pact earlier this month. While the details of the pact remain unknown, it is clear that Qatar and Turkey both look to profit from their burgeoning bilateral agreements and benefit from the relationship in their respective regions.

Qatar possesses some of the world’s largest oil and gas reserves, which account for most of its revenue. Militarily, however, they are dwarfed by their neighbours Saudi Arabia and Iran.