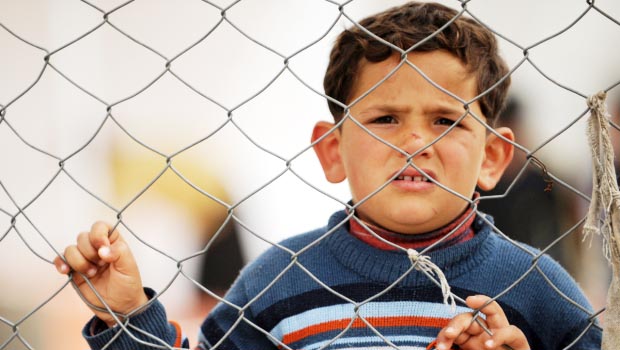 Close to the entrance of Cairo’s fabled Tahrir Square, a tent adorned in the flag of Syria houses photographs of the brutality of 16 months of atrocities and casualties of the Syrian uprising. It is a testament to the sacrifices those within Syria have made in their struggle to uproot President Bashar Al-Assad, and his grip on power.

Not far from the tent, the offices of a large refugee group in Cairo deals with the living causalities of the civil war. Refugees from the violence are arriving in Egypt by the hundreds daily and are facing challenges leaving behind the living images of the war they have escaped.

An average of 20 to 50 Syrian families are arriving every day in Egypt as the violence and destruction escalates in Syria, with more than 10,000 refugees currently seeking asylum in Egypt, a refugee legal aid team in Cairo who preferred to remain nameless to protect the families it serves reported in an exclusive meeting with the Daily News Egypt. Members of legal aid team have had their names changed for the article in order to protect their identities as well.

The refugees come and go with the ebbs and flows of violence in Syria, and face a myriad of problems upon arriving in Egypt, namely housing, education, access to health care and an Egyptian state that denies refugees free medical and educational assistance. After President Mohamed Morsy specifically mentioned Syria in his oath of office speech at the University of Cairo, adds further weight to the plight of those escaping the violence to Egypt.

As the situation in Syria further escalates, citizens find themselves trapped in a country which has little peace and security to offer. Ebtehal, a staff member of the aid group, which provides legal support for refugee applications and day to day needs, puts the number of Syrian refugees in Egypt at an estimate of about 10,000 to 12,000. An exact number is hard to determine as new arrivals are making their way to Egypt every day.

“They don’t see themselves as refugees,” Ebtehal said. “They see themselves as visitors whose stay is temporary, until things calm down in their country.” The Syrian refugees started arriving in Egypt in mass at the beginning of this year. The Syrians travel back and forth between Egypt and Syria. “Some of them have left family behind,” Maria, another member of the legal team said, “so they need to go back to check on them and then come here again.”

Stops and sparks in the violence correspond with the families and refugee movements between Egypt and Syria. Reports of massacres usually correspond with large scale movement to Egypt, the aid workers noted. “They usually come in large numbers when there is significant unrest back in Syria,” Maria clarified. “Like for instance, after the Houla massacre, the number of refugees we received was very high.”

The number of Syrian refugees in Turkey, Jordan, Lebanon and Iraq has tripled since last April to almost 112,000, according to United Nations High Commissioner for Refugees (UNHCR). Many of those refugees are choosing Egypt as their destination. Nevertheless, Egypt is not the sole destination of Syrian refugees. Tens of thousands of Syrians also take shelter in Turkey, Lebanon and Jordan.

In Jordan, continuous access in and out of the country is almost impossible. “If you arrive in Jordan, you can’t go back. It’s like you’re trapped there,” Ebtehal said. She also added that Jordan is no longer accepting refugees with passports. “You need to be smuggled in to make it to Jordan,” Ebtehal said. A UNHCR report released on Tuesday estimated that the number of Syrian refugees currently in Jordan is 33,400. In Lebanon, accepting refugees is just as difficult, due to the amount of weapon smuggling taking place between the Syrian and Lebanese borders. Despite that fact, the UNHCR report cites the presence of 28,100 Syrian refugees in Lebanon.

“Turkey offers the easiest measures for receiving Syrian refugees among all the receiving countries,” Maria said. “The Turkish Prime Minister Recep Tayyip Erdogan leaves everything open for them.” Turkey has the largest contingent of Syrian refugees with 40,000 refugees residing in the country, according to the Turkish government. However, Ebtehal was quick to mention that the language barrier Syrians face in Turkey makes them think twice before settling there. “If a family has children who need to enrol in school, language would be a problem for them in Turkey,” Ebtehal said.

Yet, things are not much easier when it comes to educating Syrian refugee children in Egypt, despite the lack of the language barrier. Apart from the fact that private schools are very expensive in Egypt, school enrolment requires the filing of special papers from the Syrian embassy, a serious roadblock standing in the way of their education.

“Most Syrian refugees try their best to avoid governmental institutions,” Ahmed, a third member of the legal aid team, said in explanation, citing fear of retaliation and lack of trust as the main reasons. “Even when they go, the embassy usually doesn’t help them.”

Other problems Syrian refugees face, include lack of proper accommodation, high medical expenses and access to public health facilities. The Syrian refugees who come to Egypt with enough money can afford renting houses and getting the service of private institutions, such as schools and hospitals. As for those who cannot afford the aforementioned luxuries, they depend on donations from Syrian businessmen who have been living in Egypt before the start of the Syrian uprising. UNHCR provides refugees who register with the organisation financial aid. “But they have to be a family to get the aid,” Ahmed said. “If you’re single – especially male, you get nothing.”

However, that is not the case only with Syrian refugees, all 40,000 refugees in Egypt face similar issues. Due to Egypt’s domestic refugee laws, asylum seekers do not have a right to receive free educational and medical assistance, unlike other countries. “Syrians in Egypt are received and treated as Arab fellows,” Maria said. Yet, despite the problems they face, Syrian refugees continue to flee their homeland, seeking temporary asylum elsewhere. “Life is not normal in Syria,” Ebtehal said. “You’re imprisoned in your home. Your water and electricity are cut off. You don’t have to be arrested or tortured to want to leave.” “They come,” Maria said, “because there is a civil war going on in their country.”