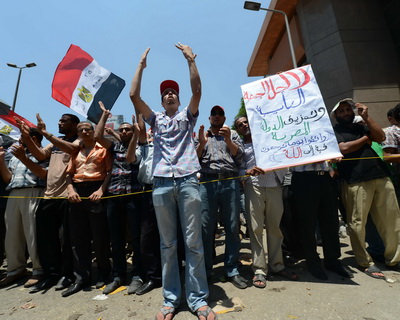 Following court sessions filled with insults, shoving matches, threats and protests against corruption of the judicial system on Tuesday, the Administrative Judiciary Court is set to rehear today the case calling for therevocation of the Supreme Council of Armed Forces’ supplementary constitutional decree under a cloud of uncertainty.

The Administrative Judiciary Court of the State Council, which was inundated with protests on Tuesday as its judges attempted to squash disorder in the courtroom by relocating behind closed doors, postponed a case calling for the dissolution of the Constituent Assembly to 30 July.

The court postponed both cases on Tuesday but is set to make a verdict today regarding the constitutional decree. Muslim Brotherhood lawyers petitioned for a change of judges for the Constituent Assembly case since the same panel had already ruled to dissolve a previous assembly earlier, which the lawyers saw as a conflict of interest.

The court had initially postponed looking into the petition to today but has announced on Wednesday that it would do so on 30 July.

It was also looking at the dissolution cases for the lower house of parliament, the People’s Assembly, and the Shura Council, its upper house. The court referred both cases to the State Commissioners Authority for a legal opinion and is expecting a report.

In the wake of the PA’s dissolution after the Supreme Constitutional Court ruled that the parliamentary elections law was unconstitutional, SCAF released a constitutional decree that limited presidential powers, especially over defence, and granted itself legislative authority instead of the PA.

If the court rules today to reverse the decree, it would put the division of power in an even foggier state. SCAF would no longer have legislative authority but the PA would still be dissolved meaning leaving who gets to legislate unclear.

The decree also gives SCAF the right to form a third Constituent Assembly in case the current one is dissolved. If the court revokes the decree but also disbands the assembly, then there would be no clear guidelines over who gets to choose a new one since the task originally belonged to parliament, which currently sees its lower and more powerful house dissolved.

The decision to postpone the recusal petition has resulted in the Constituent Assembly, tasked with drafting Egypt’s new constitution, dodging another bullet.

The assembly has been marred with controversy ever since its formation and has constantly faced threats of dissolution. A case was filed against it in the administrative court on the basis that it included parliamentarians in its composition, the same reason that led to the dissolution of the first assembly.

The court had then ruled that members of parliament only had the right to elect the assembly, but could not choose themselves as members.

The court initially postponed the verdict to 4 September, however, which led the assembly to announce it would try to finish drafting the constitution and put it up for referendum before then, rendering the case and verdict moot. But then a plaintiff filed a case petitioning the cancellation of the postponement, which was accepted.

The court was set to rule on the case on Tuesday but following the petition to recuse the bench it initially postponed it to today before moving it to 30 July.

The assembly has recently announced that it finished discussing over 70 percent of the constitution and its drafting committee is set to begin writing it on 3 August.