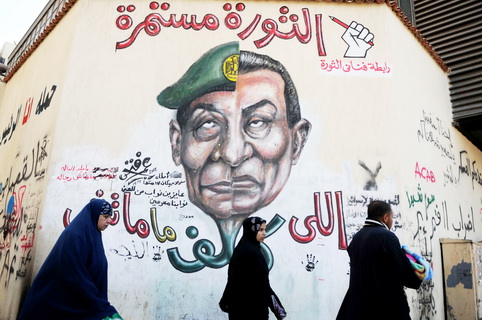 On Tuesday the extent of the impact of military justice on Egypt’s transition was apparent. Hundreds of football Ultras marched over the October 6 Bridge to the Journalist Syndicate building in a show of solidarity with those facing military trials, and those killed in the Port Said massacre.

Clashes between the Ultras and unidentified men in plainclothes at the syndicate led to several injuries.
Protesters were fired upon as bottles also rained down on them.

Meanwhile the No Military Trials movement travelled from Cairo to Suez, offering to take supporters with them to show support for protesting workers arrested the day before by military in clashes with the security forces. Ahmed H. Aggour, an activist, said the protest came as workers from Cleopatra Ceramics were arrested by the military and beaten as they were on hunger strike.

Reports of renewed clashes on Tuesday between police and workers compel people like Aggour to act against what they view as continued military brutality against labour and political protests. Aggour has been challenging ‘military fascism’ by taking down walls put up by security forces blocking several streets in Downtown Cairo to quell protests. Aggour said his fight is one he does not wage alone.

The walls are very much a symbol of the police and military state activists like Aggour and the Ultras are challenging. A few hundred just like Aggour brave the risk of arrest almost nightly in a pursuit to take down the walls. By the night’s end “we’re around 50 because many people get tired and go home,” Aggour said. “The first wall we took down is the one in El Kasr El Einy Street then, we took down half of the wall in Yousef El Guindy Street and two days ago we tried taking down the one in Mansour street but that was very tough to take down, so we’ll have to try again,” he said. “We’re going to set dates to take down the rest of the walls,” Aggour said the army put up six walls in the Downtown area and they are affecting the lives of the people living in those areas negatively. “People can’t move their cars and some people end up walking for two kilometres in order to go around the walls,” said Aggour. “What I don’t understand is why the people living there haven’t taken any initiative to take them down? ” “Shops are losing business too. One kiosk vendor in Mansour Street for example, is making less money now because less cars pass by his shop now”, he added. Aggour described the walls as, “a symbol of military fascism.”

Egypt’s military junta took charge of the country when former President Hosni Mubarak was ousted in the 2011 Revolution. During the period from February 2011 to date many have been arrested and tried in military courts. President Morsy formed a special committee to review their cases. The spokesperson of the committee, Mahmoud Fawzy said he does not know what happened to the Cleopatra Ceramics workers but said “the committee’s task is very hard and that they have little time.”

Human Rights Watch (HRW) urged President Morsy to “pardon all those convicted by military courts” last Sunday. “International law is crystal clear on this – no civilian, regardless of the crime, should be tried by a military court. It doesn’t take a committee to confirm that,” said Sarah Leah Whitson, Middle East and North Africa director at HRW.

Aggour has actively taken part in several protests calling for the release of those tried by the military. “Recently most protests calling for their release, have taken place near Morsy’s palace in Heliopolis because we don’t feel that he is doing enough for them. Morsy has the power to release them but they’re stalling, abusing the fact that the people do not know enough about laws”, he concluded.