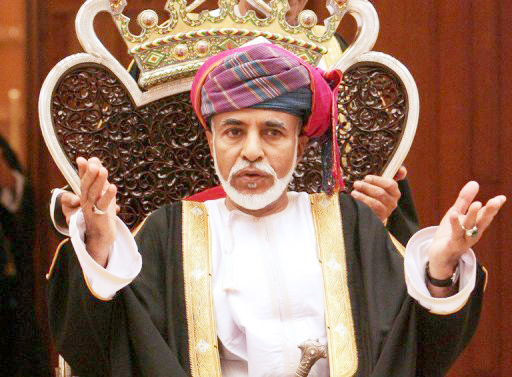 In the latest attempt by Oman’s ruling party to quiet dissent, a court sentenced five people on Monday to 12 to 18 months in jail for using social media to slander the Sultan Qaboos Said Bin Al-Said.

The five condemned, four men and one woman, have had their names and photos published publicly by the official Omani state news agency, much to the anger of many activists. Amnesty International reported that the five sentenced on Monday were university students Mohamed al-Badi and Mona Hardan, poet ‘Abdullah Al-‘Arimi, Taleb Al-‘Ebri, and photographer Mohamed Al-Habsi.

“Not even drug dealers and common criminals have been subjected to something like this,” one activist, speaking on the condition of anonymity, told Reuters. “They have the privilege of being identified by their initials and with their faces obscured.”

Earlier last week, four other people were sentenced to serve one year in jail after they had supposedly made insulting comments directed at Al-Said during protests which coincided with strikes in the oil sector in May.

On July 9, a poet was sentenced to one year in jail and a fine of 200 Omani Riyals after being convicted of insulting the Sultan online. Amnesty International reported that dozens of writers, poets and activists still face prison sentences for similar charges.

According to its reports, at least 22 people were arrested on June 11 for protesting peacefully outside of the Muscat police headquarters.

Oman managed to quiet its citizens during the Arab uprisings by promising more jobs and reform but is now faced with a growing number of frustrated civilians that see the limited amount of freedom of expression as an obstacle to real reform. The Sultan is regarded by law as being beyond reproach. Criticising him is strictly forbidden.

“The Omani authorities’ on-going attempts to stamp out dissent are unacceptable, and they must uphold the rights of all Omanis to peacefully exercise their right to freedom of expression,” Luther concluded.