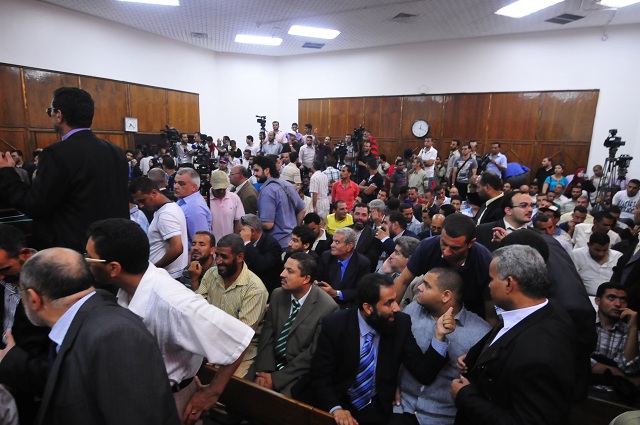 The Administrative Judiciary Court of the State Council reconvened today to pass rulings in regards to three separate cases which have thus far been postponed or redirected to other courts. The entire affair was short-lived however, as the court assembled at quarter past one and had issued a ruling five minutes later.

In the case filed against the Constituent Assembly calling for its dissolution, Muslim Brotherhood lawyers defending the assembly had filed a petition in Tuesday’s hearing calling for a change of judges, citing a conflict of interest as the same judges had ruled to dissolve an earlier constituent assembly.

The court today set the date of June 30 to look at the petition. If accepted, the case will be transferred to another bench.

The court was also looking at a case filed against the supplementary constitutional decree released by the Supreme Council of Armed Forces days before President Mohamed Morsy’s inauguration, and another against the president’s decision to bring back the People’s Assembly, parliament’s lower house that SCAF dissolved after the Supreme Constitutional Court ruled the parliamentary elections law unconstitutional.

The court ruled lack of jurisdiction on both cases and referred the latter back to the Supreme Constitutional Court.

The Supreme Constitutional Court had already independently ruled against Morsy’s decision on its own, claiming it alone had jurisdiction on matters related to its rulings. Today’s ruling by the Administrative Judiciary Court affirms that.

The court has postponed their rulings several times in recent weeks, and the final decision to refer both cases, the Constitutional Decree and Morsy’s reinstatement of the PA, to the SCC means these issues will take even longer to be resolved.

The decision to postpone the recusal petition has resulted in the Constituent Assembly, tasked with drafting Egypt’s new constitution, dodging another bullet.

The assembly has been marred with controversy ever since its formation and has constantly faced threats of dissolution.

A case was filed against it in the administrative court on the basis that it included parliamentarians in its composition, the same reason that led to the dissolution of the first assembly.

The court had then ruled that members of parliament only had the right to elect the assembly, but could not choose themselves as members.

The court initially postponed the verdict to September 4, however, which led the assembly to announce it would try to finish drafting the constitution and put it up for referendum before then, rendering the case and verdict moot.

But then a plaintiff filed a case petitioning the cancelation of the postponement, which was accepted.

The court was set to rule on the case on Tuesday but following the petition to recuse the bench it initially postponed it to today before moving it to 30 July.

The assembly has recently announced that it finished discussing over 70 percent of the constitution and that its drafting committee is set to begin writing it on 3 August.

In the wake of the dissolution of the People’s Assembly, SCAF released their constitutional decree which limited presidential powers, especially in regards to defense, and granted itself legislative authority instead of parliament.

The decree also gives SCAF the right to form a third Constituent Assembly in case the current one is dissolved.