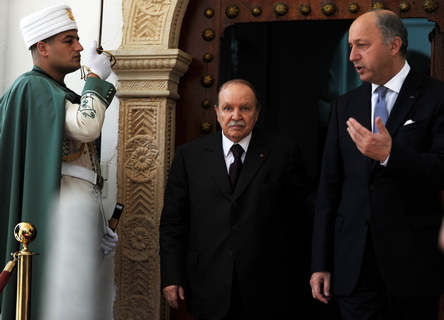 Before meeting Bouteflika, Fabius said they would discuss Franco-Algerian relations “as well as international questions”.

“My trip aims to inject new momentum to relations between our two countries. I think this will be the case,” Fabius told AFP. They were also due to discuss a state visit to Algiers planned for the autumn by France’s President Francois Hollande, a diplomatic source said.

The Algerian daily El-Moudjahid on Monday wrote of a distinct change in ties between the two countries since Hollande, the Socialists’ candidate, won France’s presidential election in May.

It noted “the importance the French authorities accord to our country with which consultations take place, especially on sensitive issues such as the search for a solution to the problem in Mali.” Fabius’s talks with his counterpart Mourad Medelci on Sunday centred on Mali, where fighters linked to Al-Qaeda in the Islamic Maghreb (AQIM) now control key northern cities. Hollande said on Saturday that it was up to Africans to decide how and when to intervene militarily in northern Mali, while adding that France “must show solidarity.”

Since the start of the crisis across its southern border, Algeria has repeatedly backed diplomacy, while France openly favours intervention against the Islamists. Fabius himself has said that the use of force was probable “sooner or later”, and that for AQIM and its allies France was “the main enemy”.

Once a beacon of democracy in West Africa, Alegria’s neighbour has been thrown into chaos by a coup in March that allowed ethnic Tuareg separatists and Al-Qaeda-linked Islamists to sweep across northern Mali in a rapid offensive. The takeover has stoked fears that Mali’s north will become a new breeding ground for terrorism, with AQIM now wielding significant influence there.

The jihadists have ousted their Tuareg rivals, enforced Islamic law and destroyed ancient World Heritage sites they see as idolatrous. Algeria played a role in mediating between Tuareg rebels and the Malian authorities in 2006, and many both within the region and beyond hope that it will throw its weight behind a solution to the conflict in northern Mali.

In a letter to Bouteflika to mark Algeria’s 50th anniversary of independence celebrations on July 5, Hollande said France should be able take “a clear and responsible look” at its past in Algeria, which it ruled for 132 years. And Bouteflika said in a message to Hollande on the occasion of France’s July 14 Bastille Day celebrations, that it was time to conduct a “lucid and bold” review of the two countries’ shared past in order to strengthen their ties.

About one million Algerians live in France, while about 24,000 French people reside in Algeria.