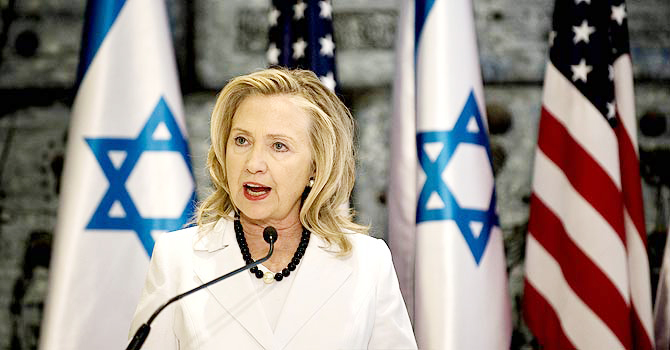 In an interview with CNN, US Secretary of State Hillary Clinton said there was “the potential of jihadists and terrorists taking up an operational base in Sinai.”

She spoke to CNN almost immediately after meeting with Israeli officials on Tuesday in a trip that was her first to Israel in almost two years. Clinton added that the situation in Sinai should be a concern for Americans, Israelis, and Egyptians.

Activist from the 6 April (Ahmed Maher), Abdel Rahman El-Masry based in North Sinai, did not share Clinton’s same concerns, “there are good security measures and a lot of cooperation between the security forces,” he said.

The security situation in Sinai is tense. Many young men in Sinai are sentenced to harsh sentences in absentia including death sentences. El-Masry confirmed that there was tension between the police and the people of Sinai and that these sentences were harsh, yet he said this was before the 2011 uprising. “Nowadays, this has become very rare and they engage in negotiations now to solve the tensions,” El-Masry said.

El-Masry explained that the crackdown on the people of Sinai before the 2011 uprising was led by State Security who created agitation between the people and the police, “sometimes even tortured people,” he said.

One Egyptian and two Americans were taken hostage by Jirmy Abu-Masuh last Friday and were released on Monday following negotiations which Major General Ahmed Bakr, Director of Security in Sinai, who told the Daily News Egypt negotiations were taking place between Abu-Masuh and heads of tribes to release the hostages.

Beside the internal security situation in Sinai, the Sinai Peninsula’s security impacts other countries in the region. “Arms smuggling from Sinai of weapons going to Libya and Gaza does take place, but you will also read that they get arrested,” said El-Masry.

Two rockets were fired from Sinai last month, near Uvda and Mitzpe Ramon in Israel, no one was hurt. Following the incident, the Israeli military recently deployed a battery of rocket interceptors called the “Iron Dome” missile defense system on the Egyptian- Israeli border. Earlier this month, the Israeli Prime Minister Benjamin Netanyahu ordered the speeding up of the building of the border fence currently being built along the Egyptian-Israeli bordes in order to prevent illegal access to Israel. Many African migrants who live in Israel have entered illegally by crossing the Egyptian-Israeli border.

Israel, which is concerned about the threat immigrants pose to its identity, has started deporting immigrants and is building a detention centre in the desert for others. Clinton’s trip to Israel which directly followed her trip to Egypt was the last stop of a long world tour. In Israel, it was believed that Clinton was there to reassure Israel’s leaders that President Mohamed Morsy would be focused on internal matters and there would be no drastic changes to Egypt’s foreign policy toward Israel.