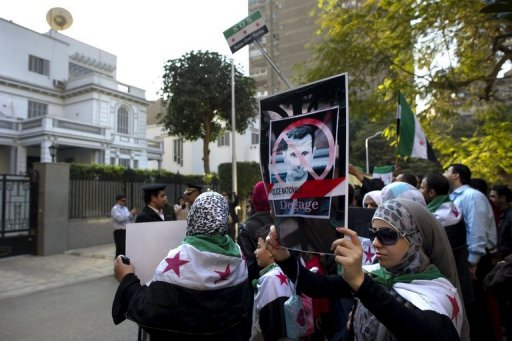 Clashes erupted near the Syrian Embassy Wednesday night amid the latest show of support by Egyptians and Syrians in Egypt for the Syrian Revolution. According to Ministry of Interior, 17 protesters were arrested and 14 soldiers were injured.

Activists –estimated to be several hundred by reports- gathered around 5:30 pm and marched to the Syrian Embassy in Garden City. Ahmed Aggour, an activist who was at Syrian Embassy, provided the Daily News Egypt with an account of what happened.

“We wanted to raise the flag to show real support for the Syrian Revolution,” he said.

“The police took the flag from us and said they’d raise it in five minutes but they were pushing and aggravating us. Then, they started firing tear gas at us,” Aggour said. The clashes started about 15 minutes after the crowd reached the embassy and continued for over eight hours, according to Aggour.

“At around three in the morning, we got very tired because they fired so much tear gas at us, eventually people started leaving one after the other,” Aggour added.

A few people were arrested during the clashes. Aggour said that while he does not know them personally, he heard that there were 23 protesters taken into custody. Media reports on the number of arrested varied.

Aggour added that the protesters grabbed one police officer and beat him. While Aggour is not very sure, he believes that the officer is safe at this point.

Several people on Twitter reported that several women were taken into the custody.

“The ladies who were arrested were released,” Aggour added.