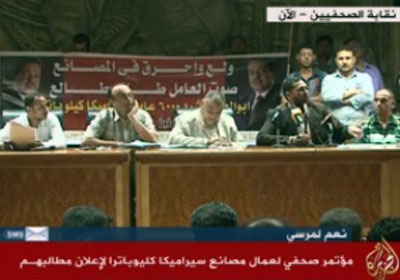 The committee charged with syndicate freedom at the Journalists’ Syndicate held a press conference on Thursday in the Syndicate, announcing solidarity with the striking workers in Cleopatra Ceramics.

The striking workers also participated in the presser. Workers used it as a chance to voice their story to the world. They asked for President Mohamed Morsy’s swift intervention in the ongoing crisis between them and the Cleopatra Ceramics Chairman, Mohamed AbulEnein.

The workers, who signed an agreement in mid-March granting them the right to three years of profits – as compensation for not having received profits since the company was established in 1987 – are calling on Morsy to enforce this agreement after its implementation has been repeatedly postponed more than three times.

They added contrary AbulEnein’s accusations that they are the cause behind the company’s massive losses, the 10th of Ramadan Factory alone produces EGP 120 million of profits.

They also accused Chairman AbulEnein of punishing them by stalling the implementation of the agreement for their siding with the revolution and with president Morsy. AbulEnein was a prominent member of the now dissolved, ex-ruling National Democratic Party (NDP).

For his part, AbulEnein had earlier held a press conference on Wednesday, where he refuted allegations that he behind the “Battle of the Camel,” a key event which took place during the 18-day January uprising in 2011, and led to a number of injuries and deaths.

AbulEnein also mentioned he is frequently subjected to “blackmail and thuggery” by lawyers and media practitioners.

The brawl between AbulEnein and the workers of his company had reached a peak when the workers camped outside the presidential palace right after inauguration, calling for their rights. Morsy met with representatives and promised to deliver a proposal to resolve the dispute, during which time they shortly-suspended their sit-in. However, Morsy’s response on Tuesday proved unsatisfactory. It obligated AbulEnein to pay the workers their past-due wages but then required the employees to bear the financial costs of the losses the company suffered as a result of the employee strikes.

The events followed with mass protests at the Cleopatra Ceramics factory in Suez which came under fire from Security forces with tear gas after they stormed a government building and allegedly set fire to offices. Six people on hunger strike were also beaten and taken into custody by the military, activists said.