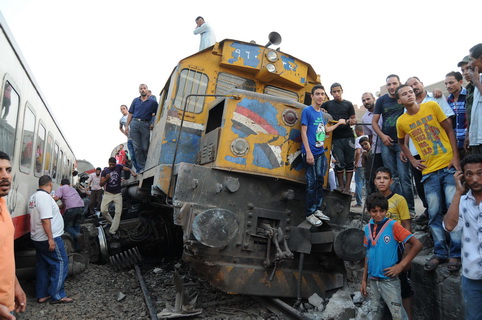 Passengers were to blame for massive train derailment on Tuesday, a preliminary investigation from the Badrasheen prosecutor’s office seems to indicate, despite the train conductor’s insistence that the train was faulty.

Yet, during the third stoppage, passengers began to lose their patience, and blamed the conductor for the breakdowns.

When the air-brake indicator gave a signal that the brake was down the train had to stop for a fourth time, which led passengers to begin arguing with the conductor. A group of passengers attacked the driver’s assistant, Ahmed Eid, who was injured as a result. The passengers then got off the train and disrupted the railway traffic by placing rocks in front of the tracks. An oncoming train, Train 990, crashed into the stones, derailing and crashing into a third train, Fayoum train 147.

Another version of events seems to indicate it was Wahba’s fault the trains collided, since he moved later than he was schedule to.

The crashes left behind 25 injured, five of them with critical injuries, according to Al-Masry Al-Youm. The Daily New Egypt, nevertheless, could not independently verify the exact number of injuries.

The accident is also being investigated by the public prosecutor’s office, while a technical committee from the Railway system has been established in order to investigate the crash.

Chairman of the National Railway System Hany Hegab, vehemently denied the occurrence of another train accident on Wednesday, according to state-owned MENA. Different news organisations reported that six train-cars had overturned in Badr City. Train accidents in Egypt are often an illustration of the nation’s larger problem with crumbling infrastructure.

In October 2009, two trains collided at high speed south of Cairo, killing 18 and injuring dozens. Eight railway employees were convicted of involuntary manslaughter and negligence and given sentences ranging from 3 to 7 years. One train had stopped unexpectedly after hitting a cow but failed to communicate the unscheduled stop resulting in a second train hitting it from the other direction.

However, several people who observed the trial believe blame lies with the infrastructure of the railroad and not the men convicted of negligence. Often it has been faulty equipment, alert systems, and poor training that lead to accidents on Egypt’s railways.