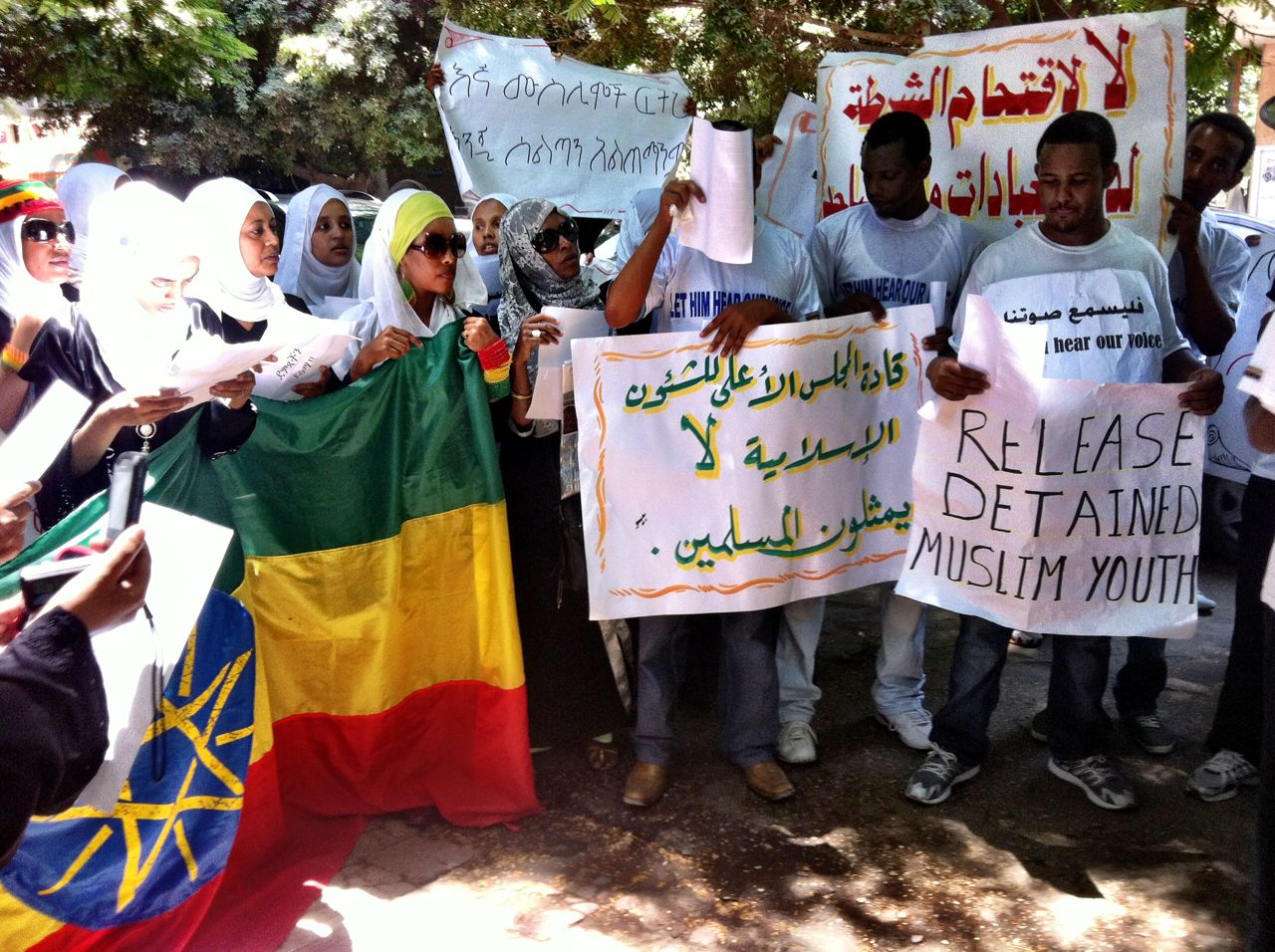 A delicate cross studded with diamonds dangled at Miriam’s collarbone while she chanted into a megaphone outside of the Ethiopian Embassy in Cairo, “Muslims and Christians together want respect for religion.”

“We learned from our parents as children to respect Muslims and Christians, what I have seen the government do to my Muslim brothers has made me come here,” she said, surrounded by a crowd.

Violence in Addis Ababa prompted a protest outside the Ethiopian Embassy in Cairo by dozens of Muslims and Christian concerned about mounting pressure against the nation’s Muslims.

Last Friday, Ethiopian security forces stormed the Awolia centre in Addis Ababa, one of the nation’s oldest and most prestigious institutes of Muslim scholarship, and shot and killed at least four people who were in the facility making preparations for a city-wide program food program called Sadaqa (friendship) feast, before Ramadan.

Ethiopia’s Muslims are reporting the government has increased pressure on their community and accused them of connections to militant Islamist organisations.

For the last seven months, 18 prominent Muslim leaders have been detained pending trial, charged with affiliations with terror groups.

However, the members of crowd gathered outside the embassy of Ethiopia in Dokki said the security scares are just a tool for the government to expand the power of security forces by sowing tensions among the nation’s historical religious communities.

Ethiopian state television reported that the protesters and their leadership were fighting with political motives, not rights-based ones. Again, the crowd in Cairo was angered by the accusation.

Francis, again a Christian, was in the crowd to show support for his Muslim compatriots, “I know the aim of this government, to create divisions which are not there.”

The constitution currently protects the rights of all religious groups in Ethiopia but critics of President Girma Wolde-Giorgis say he is not respecting the rights of Muslims for personal political gain.

A million man march is planned for the streets of Addis Ababa tomorrow, as well as Sadaqa, for the beginning of Ramadan.

Ahmed, wearing a t-shirt that read, “Let him hear our voices” said, “Cairo is now a city that represents freedom, like my family back in Ethiopia is pressuring the government to respect the rights of Muslims, I am hoping that my government here in this city of freedom will hear us.”

(Names have been changed to protect identity)