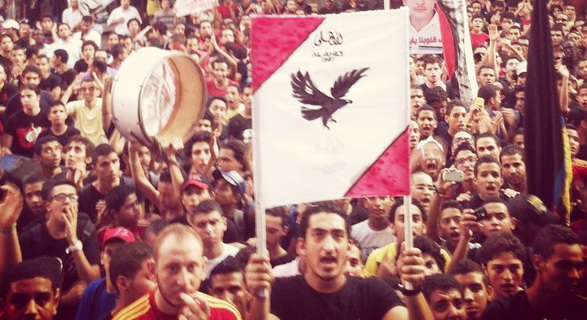 Six people were injured on Tuesday night in clashes between the Ultras Ahlawy, Ultras White Knights and “unknown” assailants who threw stones, glass shards and bottles as well as fired shotguns at the Ultras as they honoured victims of the “Port Said Massacre,” the Health Ministry reported.

The clashes occurred during a march organised by the Ultras from Al- Ahly club in Zamalek to the Journalists’ Syndicate where they were to hold a press conference with the Port Said victims’ families.

The Ultras had promised to unveil secrets about the ‘Port Said Massacre’ during the conference.

There were conflicting reports about the identity of the attackers. Some news agencies reported that they were ‘thugs’, a term often used in post-uprising Egypt to signify plainclothes security officials who are loyal to the previous regime.

Other observers and those down at the march said the assailants were a mix of residents in the area and angry shop owners who were fed up with the protests.

Another news report implicated the Ultras in starting the fracas.

According to the report, members of the Ultras forcibly took bottles of soda and water from a kiosk prompting its owner to ask residents for help.

The story could not be verified since members of the Ultras refuse to talk with the press.

A syndicate security guard told Al-Ahram Online “Some people, out of nowhere, attacked the Ultras with bottles and stones, we also heard shotgun discharges.”

The clashes lasted for 30 minutes before the Ultras decided to return to the club headquarters and sit-in.

During the march, Ultras chanted against Al-Ahly’s board, particularly its head, Hassan Hamdy and the players for inaction in regards to pursing who the perpetrators of the Port Said Massacre were.

The Ultras said the club “forgot” about the martyrs.

The Club and the Ultras have had strained relations as of late, especially after Coach Hossam El-Badry had to cancel a recent training after Ultras stormed the stadium.

The board later issued a strongly-worded statement denouncing their behaviour and saying the club took all possible measures to defend the martyrs and preserve their families’ rights.

A number of Al-Masry football club fans and security officials face charges of premeditated murder and negligence respectively, the trial was postponed by Port Said Criminal Court to 25 August.