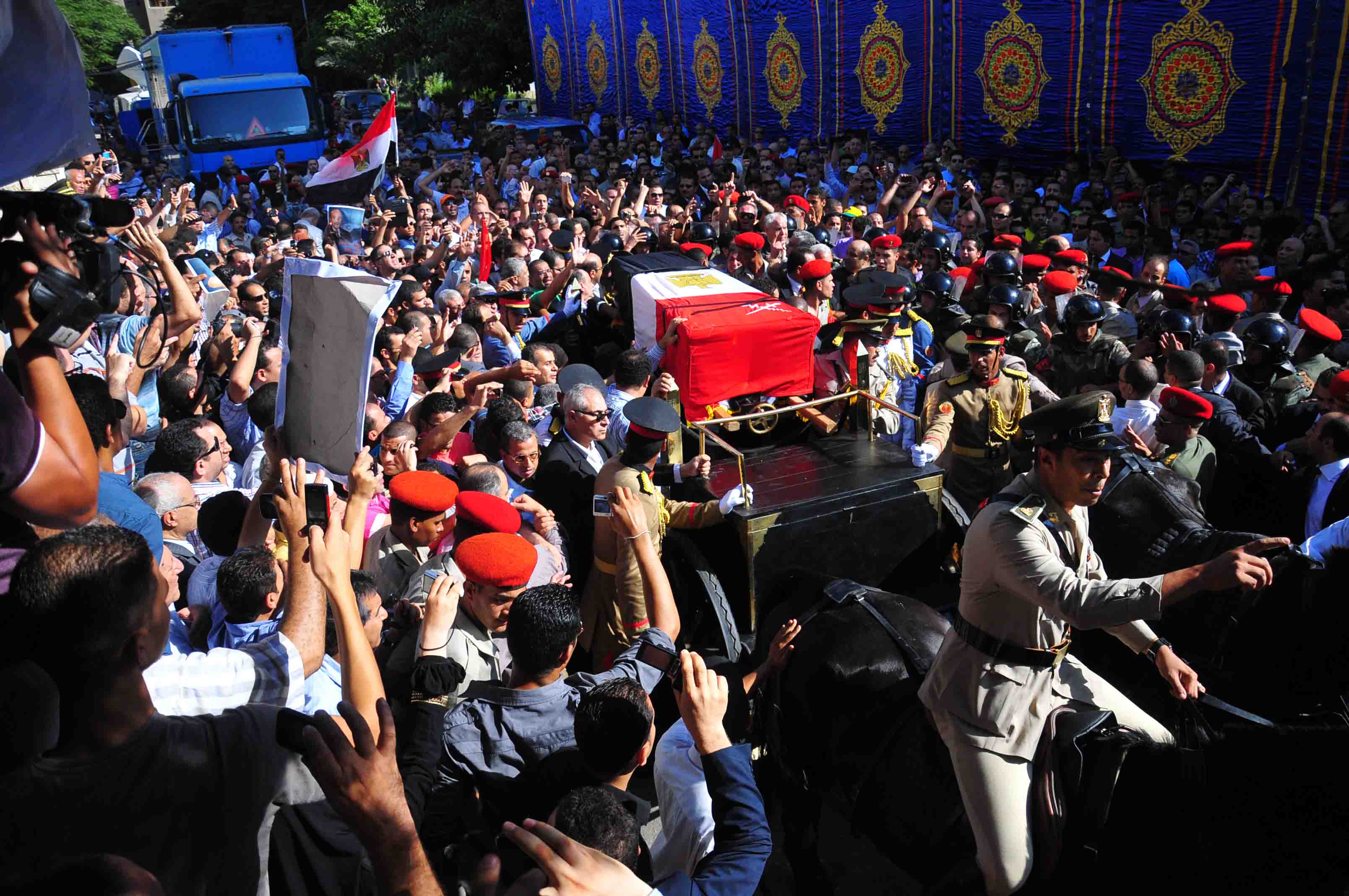 Thousands gathered to bid farewell to the body of former intelligence chief and vice president Omar Suleiman on Saturday as his coffin draped with the Egyptian flag was drawn by horse carriage to outside of the Al-Rashdan Mosque in Nasr City.

Suleiman was given a military funeral that was attended by Commander-in-Chief and Chairman of the Supreme Council of the Armed Forces Minister of Defence Field Marshal Hussein Tantawi alongside other SCAF members and military leaders. Al-Azhar Grand Mufti Ali Gomaa also attended and led prayers over Suleiman’s body inside the mosque.  President Mohamed Morsy did not attend the funeral and instead sent the Grand Chamberlain of the presidential office Major General Abdel Momein Fouda, who was booed by the crowd as they chanted “Morsy’s deputy leave.” The crowds also chanted “down with the Guide’s rule” in a reference to the Muslim Brotherhood to which Morsy belongs and its leader Mohamed Badie who holds the title of General Guide.

Suleiman, 76, died at the Cleveland Clinic in the United States as he was undergoing a routine medical check. He was diagnosed with amyloidosis, a disease that affects the heart and kidneys and later died from complications while undergoing treatment today, spokesperson Wyatt DuBois of the Cleveland Clinic said.
“On Thursday, July 19, General Omar Suleiman, former Vice President of Egypt, passed away due to complications from amyloidosis, a disease that affects multiple organs including the heart and kidneys. General Suleiman arrived Monday at Cleveland Clinic where the disease was discovered after undergoing multiple medical tests,” Wyatt DuBois, a spokesperson for the clinic, told the Daily News Egypt.

A stalwart of former President Hosni Mubarak’s regime, Suleiman was Egypt’s top spy chief, heading the General Intelligence Directorate for 18 years before Mubarak appointed him as his first and only vice president after wide scale protests calling for his ouster in January 2011. It was Suleiman who announced Mubarak’s resignation on February 11, making the brief worldwide, but historic statement.

The idea of Suleiman receiving a military funeral did not sit well with activists and revolutionaries. The former vice president was notorious for his employment of torture during his tenure as intelligence chief and according to wiki leaks cables his even sat in on, and participated in, torture sessions.
When asked by US officials to provide DNA samples of Al-Qaeda leader Ayman El-Zawahri’s brother, who is being held prisoner in Egypt, Suleiman was famously reported to have said he could send the US the man’s arm.

Suleiman was also one of the most influential participators in the US’s extra rendition programme. The US would send terror suspects to “friendly” countries like Egypt for interrogation, largely involving torture.

As intelligence chief, Suleiman was tasked with handling Egypt’s top foreign policy files, traditionally the domain of the Foreign Ministry; such was Mubarak’s trust in him. He handled the Ethiopia and Nile basin countries portfolio, the Palestinian reconciliation case, and the Sudanese split issue. Suleiman also handled all communications with Israel and was viewed favourably by the Israeli government.