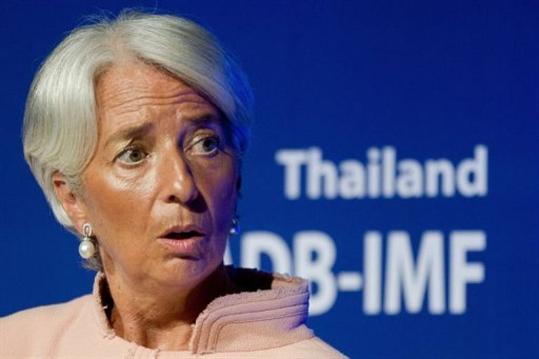 Washington (AFP) – A departing senior IMF economist has excoriated the fund, alleging it failed to address Europe’s crisis and “suppressed” its challenges, according to a letter published Friday.

In the letter obtained by CNN, Peter Doyle also accused Christine Lagarde, the managing director of the International Monetary Fund, of being “tainted” by a faulty selection process.

Doyle, in a resignation letter dated June 18 to the IMF executive board, expressed regret to have worked at the Washington-based global lender.

“After twenty years of service, I am ashamed to have had any association with the Fund at all,” he wrote to Shakour Shaalan, dean of the board.

Doyle said it was not just a matter of the fund’s incompetence amid the global crisis and in surveillance ahead of the eurozone crisis, but because the institution deliberately had shirked its responsibilities.

“The substantive difficulties in these crises, as with others, were identified well in advance but were suppressed here,” he wrote.

“Timely sustained warnings were of the essence. So the failure of Fund to issue them is a failing of the first order,” he said.

That inaction has caused suffering for many, including Greece, and “the second global reserve currency (euro) is on the brink.”

The IMF has been “playing catch-up” in reactive responses in last-ditch efforts to save it, the economist charged.

Doyle accused the IMF of “European bias” which he said was becoming more deeply entrenched, despite reform commitments.

“This fact is most clear in regard to appointments for managing director which, over the past decade, have all- too-evidently been disastrous.”

Under a tacit agreement between the United States and Europe, a European heads the IMF and an American holds the presidency of the World Bank, its sister institution.

Without personally criticizing Lagarde, a former French finance minister and the first woman to helm the fund, Doyle said: “Even the current incumbent is tainted, as neither her gender, integrity, or elan can make up for the fundamental illegitimacy of the selection process.”

According to a person close to the situation, Doyle has been a division chief responsible for non-eurozone countries Israel, Sweden and Denmark and has had no crisis country responsibilities in the European Department.

He is currently listed as an adviser in the European Department, the person said.