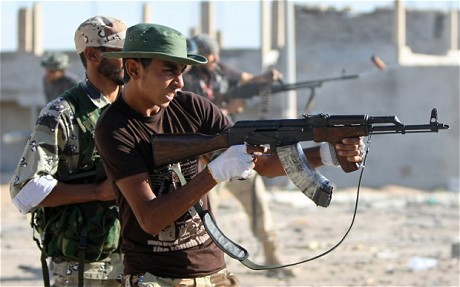 On Saturday, the Commander of the Libyan Ground Armed Forces General, Khalifa Hefter requested that all officers and soldiers who fought against former Libyan leader, Colonel Gaddafi, to return to help rebuild the Libyan military and prevent further proliferation of armed militias which have overrun post-revolution Libya.

General Hefter went on to affirm that many members of the Libyan Army across all ranks have always held neutral or negative sentiments towards their former dictator and served out of respect for military law and fear of the security forces loyal to Gaddafi. He expressed fears that the lack of a strong military and police forces would pave the road for a state in which rogue militias hold more power than legitimate authorities.

Hefter also stressed the importance of reconstructing the national army in achieving the revolution’s goals, affirming that rebuilding the army lies in the will of the people, who recognise the Army as a beacon of stability and the nation’s reputation. He also criticised political plots cooperating with foreign agents.

Despite holding successful elections, the Libyan government has faced major obstacles in re-establishing the country’s national security. Dealing with revolutionary militias has proven difficult because of confrontations between rival groups and retribution attacks on perceived supporters of the ousted dictator.

In their July report Libya: Rule of Law or Rule of Militias? Amnesty International highlights the displacement of entire communities deemed loyal to Gaddafi, with estimates of 30,000 refugees being driven out o the city of Tawargha by Misrata militias. According to Amnesty International, human rights violations run rampant throughout the country with incidents of militia members committing torture and arbitrary detentions.

General Hefter’s appeal is the most recent of many attempts to bring militias into a cooperative partnership with the Libyan military, an institution that many militias have refused to work with due to its connection with the previous regime.

The Libyan Shield Force, a coalition of militias has which works alongside the Libyan Army, is making efforts to crack down on tribal fighting. The Libyan government needs the same cooperation from other militias across the country, but the new central government has been weakened as Libyans turn to more localized forms of governance supported by local militias. When an armed militia from Bani Walid kidnapped two journalists, government deadlines passed to no effect and they were released when pressure was applied by Misrata militias.