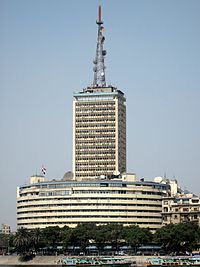 The Egyptian government is currently working to restructure a number of government economic authorities so that they’re profitable instead of experiencing continuing losses.

An official source within the Ministry of Finance revealed that the government is considering raising television fees that citizens pay as part of their electricity bill. The step would raise the fees to EGP 0.02 per kilowatt-hour, up from the current rate of EGP.002 per kilowatt-hour. The official indicated that the government would use the extra revenue to bolster the Egyptian Radio and Television Union (ERTU), which has failed consistently to break even. Currently, meetings are taking place between ERTU representatives and members of several economic authorities under the Ministry of Finance.

The source revealed that the current television fees were set in the 1970s and that the additional revenues from the change would help to restructure the ERTU.

If the Ministry of Electricity approves the new fees, it will include them in electricity bills on a monthly basis. The source said that the increase would not significantly affect electricity bills, only adding several piastres each month. The new fees would, however, add millions of pounds to the state’s radio and television budget.

Legislators attempted to raise television fees four years ago, but Anas El-Fiqqi, the Minister of Information at the time, feared a negative popular reaction to the changes. The parliament eventually removed the law from its list of priorities.

The new parliament, when it is elected, is expected to discuss raising television fees after reviewing the resulting increase in state revenues as a result of a new law.