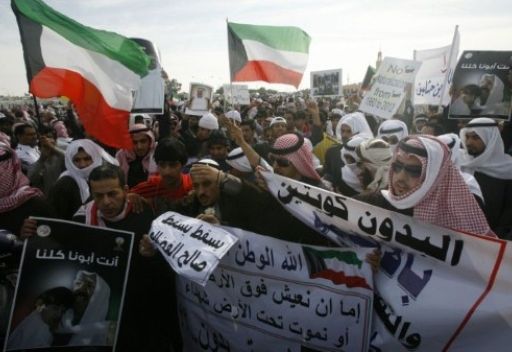 The Council of the University of Kuwait has decided to allow 100 outstanding Bedoon students to study in the university for the next academic year, the move comes as the government faces increased pressure from rights groups, according to various Kuwaiti media reports.

Gulf countries have been especially harsh with their handling of the Bedoon, ‘the without,’ denying many rights because of their stateless status and in one case deporting an activist in the United Arab Emirates to Thailand.
The Bedoon in Kuwait have thus gained 85 more seats than they were previously allowed. The Kuwaiti government had restricted members of the group to only 15 seats at the university. The students have to be high achievers with at least a 90 percent score in high school, according to the Kuwaiti daily Alrai newspaper. However, the Bedoon will be unable to choose their majors, activists reported.
Not all of the students will be admitted into the university at once. Only 15 will be admitted in the first semester and 85 will be admitted in the second. Another condition the students will have to meet is to provide a valid security card.
The Bedoon were granted the increase in number seats following silent protests by Group 29, a group of activists, in front of the Admissions Office in the university where they demanded 150 seats rather than the 15 they had.
According to the Kuwaiti daily Al Anbaa newspaper, there are different coloured security cards for different groups of Bedoon. Most security cards are temporary and they are given on the basis of the legality of the Bedoon residency in the country. After being issued the card, which may last from a year to five years, the Bedoon members will either have to amend their legal status in the country or they may be considered for Kuwaiti citizenship.
Bedoon is Arabic for “without” and is a collective term used to describe the stateless people living in Kuwait without any nationality. They are often referred to as “illegal residents” highlighting the fact that they have very limited rights in the country. According to the Refugees International, the Bedoon “are not recognized as legally residing in Kuwait.”
According to the Bedoon Rights network set up to advocate for better rights for Kuwaiti Bedoon, there are 120,000 Bedoon living in Kuwait without rights to access to a death and birth certificate or basic rights such as “public education, health care, housing or employment.”
Activists from Group 29 have been raising funds from businesses and businesspersons to study in private universities, said Bedoon Rights.
Committees set up to resolve the citizenship issue of the Bedoon have largely been ineffective. Kuwaiti Bedoon, comprise 10 percent of the Kuwaiti population according to Bedoon Rights. Bedoon activists and advocates took to the streets in early 2011 in protest of their conditions, demanding the rights entitled to citizens of the small Gulf country.
Amnesty International said the Bedoon hold regular protests in Freedom Square in Taima’ following Friday prayers. The Kuwaiti government however did not welcome the protests. Similar to various governments in the Middle East, the Kuwaiti government met the protests with a severe crackdown.
Human Rights Watch (HRW) the government has “violently dispersed protests on several occasions with water cannons, tear gas, smoke bombs, and sound bombs.” Security officials have also even beaten and detained activists in order to end the protest movement, according to Refugees International.
Both the HRW and Amnesty International have denounced the government use of force and have called on the Kuwaiti government to allow the Bedoon the right to expression and assembly. Amnesty International’s call came following a statement by Kuwaiti officials warning Bedoon activists against protesting earlier this month.
Eleven Bedoon rights advocates were arrested earlier this month, and released on bail on Monday according to the Kuwait Times. They are accused of violating several laws, including taking part in an illegal gathering.