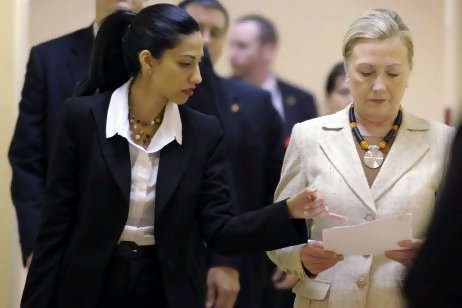 An aide to United States Secretary of State Hilary Clinton, Huma Abedin, has been put under police protection after receiving threats from a New Jersey man, The New York Post reported.

The development stems from the fallout of a conspiracy theory put forth by the Republican Congresswoman from Minnesota Michele Bachmann in a series of letters circulated to members of Congress and a number of the United States Government bureaus claiming Clinton’s aide and her family had ties to the Muslim Brotherhood, requesting an investigation.

“It appears that there are individuals who are associated with the Muslim Brotherhood who have positions, very sensitive positions, in our Department of Justice, our Department of Homeland Security, potentially even in the National Intelligence Agency,” said the congresswoman to the St. Cloud Times, a local Minnesota newspaper.

She also cited the actions of the State Department in granting Hani Nour Eddin a visa to meet with US officials in June, despite his membership to Gamaa Islamiyya, a group still categorized as a terrorist organisation by the same department, as another example of infiltration.

Bachmann’s comments have stirred controversy among fellow congressmen, including members of her own party. On Thursday the Republican Senator from Arizona, John McCain, criticised Bachmann’s claims on the senate floor calling her allegations against Abedin an “unwarranted and unfounded attack on an honorable citizen.”

Fellow Republican John Boehner was quick to dismiss alleged ties to Bachmann saying, “I think accusations like this being thrown around are pretty dangerous.”

Ahmed Al Nahhas, MB activist and leader in Alexandria commented, “I haven’t heard these rumors, but they strike me as ridiculous. Surely the United States government selects its employees carefully.”

Abedin’s alleged connection is through an indirect connection stemming from her father Syed Zainul Abedin, a Muslim born in British India who passed away two decades ago.