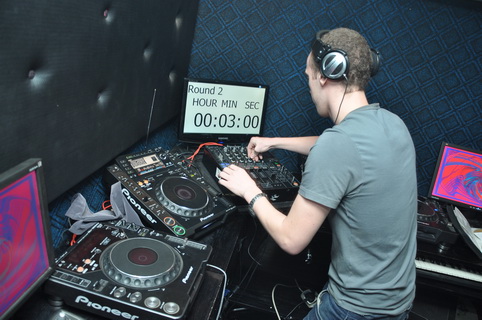 Scratch Media Production has announced that the DJ Scratch Battle of 2012 has begun. It is the second year of what is intended to be an annual competition held during Ramadan. This year, students, members and fans alike are being encouraged to participate in the event in which, unlike last year, there are no losers.

The competition is divided into three stages; the first stage has begun and is an open call for candidates to send in a 20 minute demo which illustrates their talents. Participants should be aware that their contributions will be judged on mixing techniques, track selection, number of tracks and the candidate’s ability to harmonise the beats. The deadline for submissions for the first round is 5 August and the results will be announced on 8 August. Everyone is welcome to submit their masterpieces as long as they register and pay EGP 200 before the deadline.

The second round takes off on 13 August and will showcase the first round’s winners’ prowess with the turntables. Every candidate will be performing live in Scratch Media Production’s studio for a 15 minute set while a big screen is set up outside the building so the audience can enjoy their talents. Only five of the competing candidates will progress to the final round.

In the third and last stage of the competition the finalists will get the chance to perform in front of a live audience, and of the five, three will be the winners of the main prizes. Whilst the main prizes are substantial – membership, sponsor prizes, a discount on production courses – every person that participates is given a free hour or two of studio time and a discount on membership at Scratch Media Production. The exact venue for the final event has not been announced yet, but it promises to be an evening not to be missed.

According to Amr Dahroug, Operations Manager at Scratch Media Production, the competition promises to be bigger than last year’s successful event. “Last Ramadan’s battle was big and everyone loved it,” he said. “This year we hope to build on that success and to offer a wide variety of prizes for everyone that participates. We have more sponsors and big names supporting us and we will be announcing more prizes today and tomorrow.” Dahroug hinted at the possibility of beanbags, turntables and other equipment being a part of the additional prizes.

Last year’s competition was only open to graduates of the DJ courses Scratch offers, but this year they aim to expand their talent pool in preparation for the opening of a record label under the Scratch Media Production umbrella. Budding DJs are welcome to use their studios for an hourly fee, or monthly subscription. The event is set to coincide with Ramadan every year, with a bigger and better show every time.

For those of you who enjoy the creative art of scratching, this is the event to show off your skills.